At the 3 1/2 hour mark, the forums were updated with this notification indicating a possible total 4 1/2 hour downtime:

This morning’s downtime downtime is running longer than expected – EQ2 servers should be unlocked by approximately 11:30AM PT.

Battle upon the High Seas

POPULATION / ZONE PROGRESSION
Fixed an issue that prevented non-members from entering the following zones after the membership restrictions were lifted.

Any change to Proving Grounds (PvE Battlegrounds?) likely requires patching both US and EU servers, so we’re going to go out on a sturdy limb and guess…

Also it looks like EQ2 Developer Snark has now leaked into the update notes. From the EQ2 Forums:

Two pieces of news from yesterday and today.

From Gninja on the EQ2 Forums:

We are looking into the issue. For now we have locked the BG server so no more folks get stuck loading.

If you have a character stuck send me a Private message with server/character name and I can see what I can do.

Meanwhile Roshen has an update about delays in Krono redemption…

We’re aware of an issue with krono purchases, which is causing long delays between when a purchase is made and when krono is delivered. It seems like krono delivery is currently taking up to 48 hours. Our team is aware of this issue, and it currently working towards solving this.

Thank you for your patience! 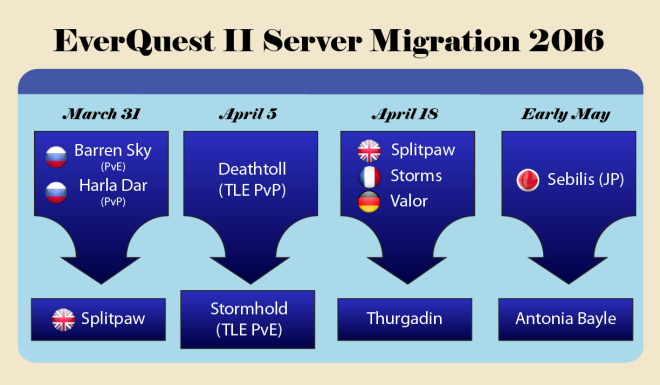 The Time-Locked Expansion servers Deathtoll and Stormhold will come down tomorrow morning in order to merge Deathtoll with it’s PvE-only sister server Stormhold.

Here’s the official announcement from the EQ2 Forums:

Both and Deathtoll servers will come down for maintenance beginning at 2:00 AM PT (9:00 AM GMT) for an update to merge servers as mentioned here. Downtime is anticipated to be at least 12 hours to perform this operation.

After today, EverQuest II will have no more Player-vs-Player servers other than the Battlegrounds server.

Introduced as an addon feature fourteen months after the game’s launch, Player vs Player combat in EverQuest II has always had an identity crisis.

In spring 2006, open-world PvP was bolted onto EverQuest II’s core game through the introduction of several open world PvP or “red” servers — Darathar (UK), Talendor (DE), Gorenaire (FR), Venekor (US RP), Vox (US), and of course Nagafen (US). In 2009, the population of Venekor, a RP PvP server, was merged with Nagafen. With the collapse of LiveGamer player auctions in 2011, Nagafen absorbed the Vox population.

Despite significant and later sporadic development effort to keep PvP relevant, Nagafen’s population gradually dwindled to a point last year where just a handful of daily logins were being reported. Last fall, the difficult decision was made to migrate those remaining Nagafen players to the decidedly non-PvP world of Antonia Bayle. All did not seem lost for PvP diehards though…

With last summer’s launch of Deathtoll, a Time Locked Expansion PvP server with travel restrictions, limited escape options, and access to Battlegrounds completely blocked, things were looking up for open world PvP. Thousands of TLE PvP characters were created within hours of the server’s launch. It briefly seemed like a second TLE PvP server would be needed, and indeed the name Bonemire was reserved, later depriving the consolidated Butcherblock/Crushbone/Oasis server from a non-punctuated name choice.

Yet despite massive early enthusiasm, the underlying problems of a bolted-on system remained. EQ2 was never designed for PvP and despite sometimes Herculean efforts over the years to maintain a semblance of balance, skilled players always find the right combinations of class, gear, and abilities to make them unbeatable, frustrating others until they leave. With the departure of more and more well-meaning but outmatched cannon fodder, the remaining kings of the mountain squabble over titles and wonder why their easy prey has permaquit.

PvP’s shrinking audience may ironically be attributable to listening to player feedback by EQ2’s developers. On more than one occasion, an extremely vocal minority has dictated forum discussions which led to hefty PvP patches that only relocated PvP lopsidedness rather than stamping it out. Regardless of who or what is to blame, PvP’s 10 year run in Norrath seems to be at it’s end.

On April 9th, Deathtoll will merge with Stormhold (the TLE PvE server currently unlocked up to the Kingdom of Sky expansion). Harla Dar, the Akella Online-managed Russian PvP server, will be folded into Splitpaw on March 30th. Cross-Server Battlegrounds will remain for those who need their PvP fix.

PvP
Fixed an issue where killing players on your recent kill list was not being processed correctly.

We have more details now about the upcoming Server Consolidation for EQ2 live servers, specifically which servers are merging where. To avoid confusion or “TL;DR”, we’ve prepared this handy guide to exactly what the server landscape will look like after this change: 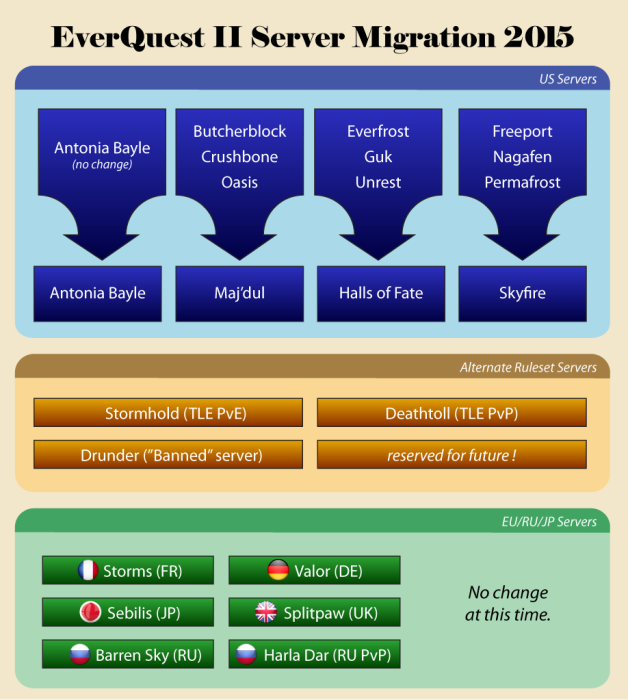 (updated on October 6th with the new server names)

There’s no word on how character names will be reserved, as that is probably still being hammered out, but the most notable news today will likely be that Nagafen is merging into Freeport and Permafrost. This is not really surprising given how few players were logged in even at peak hours (maybe 30-40?). Deathtoll has shown that PvP can be very popular in EQ2, if the ruleset is right and there are limits on travel convenience.

Here’s the announcement from Holly “Windstalker” Longdale on the EQ2 Forums:

Winds of Obol adornments have been rewritten to grant a flat 25% Potency for each group member who has one adorned. They can be used alongside Truespirit’s Legacy. This replaces the old buff which granted +25% potency but only to offensive spells and combat arts. The old effect frequently dropped on zoning and was the subject of numerous bug reports.