The moment we’ve been talking about for months has finally arrived: it’s the launch day for GU100! Are you ready to voyage to the Scourge Wastes and take on terrifying new adversaries? Will you be scouting for shinies to complete over forty new collections? Is your heart ready to connect itself to its true mate? All this and more awaits you with the launch of GU100!

Access to special zones is one of the perks of having an All Access membership. In GU100 we’ve added Zek, the Scourge Wastes and Scourge Keep. Also, Fabled versions of Ruins of Varsoon, Temple of Cazic-Thule, Chamber of Immortality, and Sanctum of Fear that have been updated for level 100 players. You’ll need an active membership to adventure in these zones.

THE SIEGE OF ZEK
The Orcish Wastes have been invaded! The Green Hood and Deathfist clan have been routed by a new breed of orc, The Scourge, who are preparing their armies to advance beyond the wastes. They must be stopped, or Norrath will be ruled by the tyrants of The Hounds of War!

Game Update 100 “The Scourged Wastes” has been under invite-only beta for the last three weeks and tonight it will hit the Test server to allow for a bit of public testing prior to its April 28th launch. Bugs should be reported on the EverQuest II Bug Tracker. The full Test Update Notes can be read here, but we’re going to cherry pick a few interesting points…

We’re getting close to the launch of GU 100! This Members-Only content is planned to be released on Thursday, April 28th, and we’re continuing to preview the exciting new and updated content that will be available in it. If you missed the first two, you can read them here and here.

Now it’s time to venture in to Scourge Keep!

From Chris “Chrol” Garlick on the EQ2 Forums: 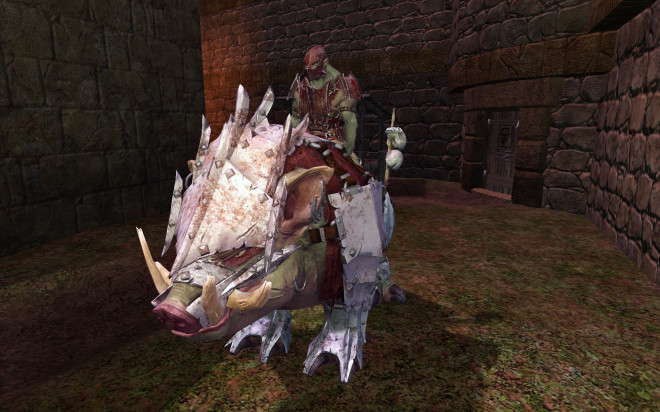 Deathfist Citadel. It was once the stronghold of the great orc emperor, Fyst, and his savage Deathfist clan, who held sway over all the lands known as Zek, the Orcish Wastes. But that was the past. The grip the Deathfists had upon the land has been completely severed by the coming of a new breed of stronger, more intelligent orc, known simply as The Scourge.

After rising up from what was once known as Blood Ore Valley, The Scourge spread devastation throughout the wastes, swiftly taking the citadel for themselves and renaming the fortress Scourge Keep, and the valley from which they were born The Siege, where their leaders machinate against anyone who would oppose them.

This would include the Green Hoods, who have been at the forefront of the battle against the Deathfist Empire. With the aid of heroes from throughout Norrath, they kept the Deathfist contained within the wastes. Now, with this new orc threat, the Green Hoods look again for help from beyond the wastes, and know that this time – if gone unanswered – not only will their time on Norrath be at an end, but so too could the rest of the world with the release of the Scourge horde. 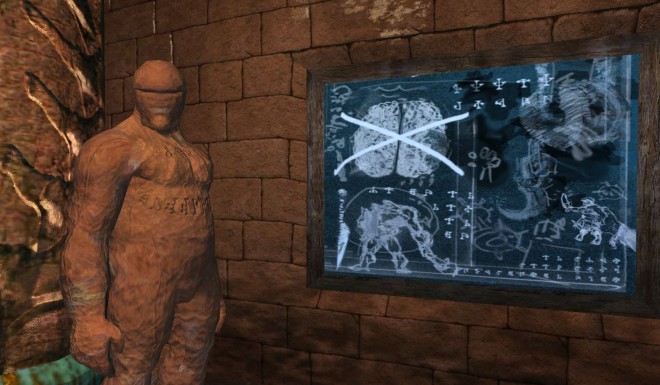 Remember going into Ruins of Varsoon and making that leap into one of the side tunnels? Lace up your boots, as this is one of the zones we are giving the “Fabled” treatment this time around. The dungeon will be leveled up to current content of level 95+ and given new and exciting loot to chase. Chamber of Immortality, Temple of Cazic-Thule, and Sanctum of Fear are also being made available as “Fabled” versions.

This new content should have some of your favorite parts of the dungeons made appropriate for the most seasoned adventurers. Even Venekor himself is rumored to make an appearance within the Fabled Temple. Ruins of Varsoon and Temple of Cazic-Thule will both be contested dungeons set to low minimum limits to spin up new instances, so that if the zone gets too crowded you can enter a new one where you might have more luck hunting down those specific named creatures you are looking for. Chamber of Immortality and Sanctum of Fear will also have interesting new boss loot waiting to be discovered. All of these zones will be available to subscribers with the upcoming GU100 release. 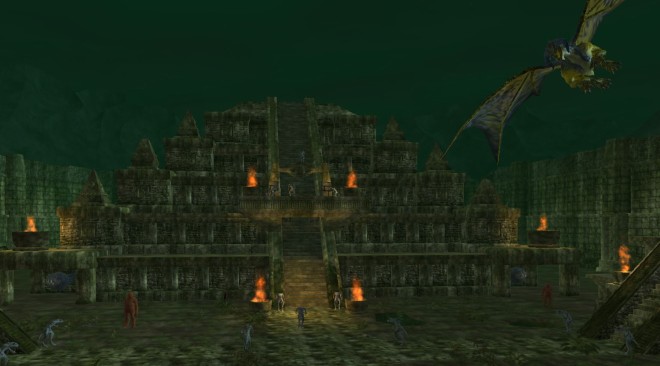 On Thursday, April 28, EverQuest II will be launching GU 100! This members-only content, designed for highest-level players, will include new zones, content, features, and items. Today, we’re going to journey into the first new zone: Zek, the Scourge Wastes!

From EQ2 Senior Designer Nathan “Kaitheel” McCall on EverQuest2.com and the EQ2 Forums: 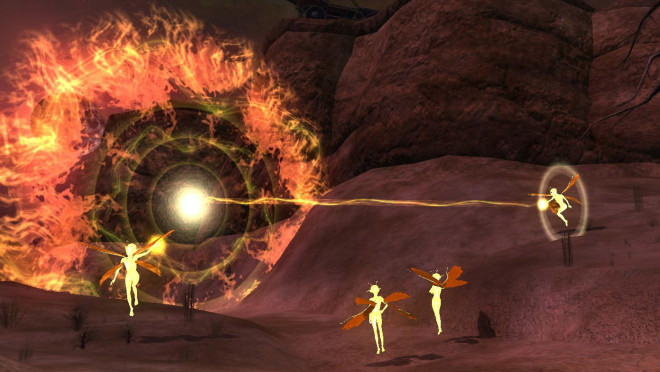 Ravaged by the horrors of war, the vast majority of the island of Zek has been unsuitable for habitation by anyone, ever since the Deathfist clan of orcs took control of the entirety of the island. They reduced the once-sprawling Jaggedpine Forest to a mere husk of its former glory, stripping much of the forest down to barren, charred earth, while pillaging the land deep below the surface through their ravaging mining operations. What little landscape remained lush and green was guarded by a band of woodland defenders known as the Green Hoods. Their numbers surged during the Age of Destiny, providing them the manpower necessary to begin striking back at the Deathfist Empire, but their successes would be short lived.

Yesterday’s EverQuest II Spring Update Livestream is now viewable on YouTube. You can learn about Zek, The Scourged Wastes, the new Signature quest, the three heroic instances, and the x4 raid zone all coming on April 28th.

US  & EU EverQuest II Live Servers will be brought offline on Wednesday, March 9, 2016 at 7:00AM PST* for an update. Estimated downtime is approximately one hour.

From Caith on the EQ2 Forums:

* The new raid and heroic drops added on February 17th are having their names changed slightly so they can be viewed side-by-side in game (and as a side benefit, they will no longer conflict on EQ2U).

8:30am PST Update: This maintenance appears to be running long.

12:00pm PST Update: Servers are now up after a five hour downtime.

LIVE EVENTS
The Erollisi Day “Lovely Lacquer” achievement can now be updated by crafting the passionate and romantic filigree rugs.

and a late entry…

Terrors of Thalumbra has been out for over two months, and some players may just now be coming back to the game after a break, or have been playing the expansion but want to get better. With Terrors of Thalumbra, the token grind to add colored gems to gear has given way to dungeon dropped-armor, jewelry, accessories, and weapons which are then upgraded through Infusing.  Add that to Reforging, Adorning, and other game systems and there is quite a lot of “homework” just to play EQ2 these days. Before we go any further, I do not hold myself up as any kind of authority on game itemization or mechanics. Much of this information has been acquired through extensive discussions with other players or personal experience, which likely does not reflect “end game” EQ2.

Some of you may be snowed in or, in my case sleeted in. If you were hoping for some promising news about Norrath, Kander has this brief take on Twitter:

Currently working on new Fabled dungeons for this year. We'll be doing something different this time around.

Looks like a large part of the patch didn’t make it to the live servers in this morning’s hotfix, so this is still currently bugged. We’re working on getting it out asap.

We are working to get the parts of the patch that did not make it to live servers remedied asap. We are working on it as we speak. Thanks…

Here’s what got patched (from the EQ2 Forums), including that frustrating bug affecting the progression of numerous Zones such as Castle Highhold… 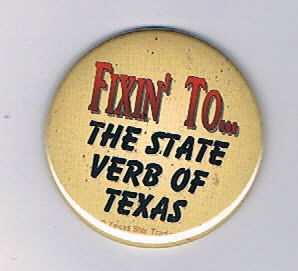 Like previous expansions, Terrors of Thalumbra includes shiny “collections of collections” or meta-collections. A number of the expansion’s collections reward a piece which is part of a larger collection. When the expansion launched however, some of these pieces were not being rewarded. This week, Caith went through game logs to award the correct items to the players who had completed the quests but didn’t receive the pieces. From Kander:

We have started reimbursing these missed meta collection pieces. If you haven’t been reimbursed for missed metas, Please email me.
[email protected]

Email me if you have collections you have completed and did not receive the meta reward. We will of course be verifying any claims via logs.

Second, the collection rewards need to be corrected to properly reward the pieces. This is still in progress…

From Caith on the EQ2 Forums yesterday:

Quick update folks, we’re working on the collection issues, they are not yet fully resolved. None of the collections that have been completed are the final collection for the expansion, so you have not yet seen the final reward. We are aiming at having the issues resolved for next hotfix, we’ll let you know if that changes.

Anyone that completed one of the collections that was fixed in December have been granted the collection pieces that they missed out on. The grants were completed today.

As for the Time-Locked Expansion servers, a significant effort was made to go through heroic and raid rewards for the Kingdom of Sky expansion to bring the items up to snuff. After numerous revamps left the raid gear untouched, it had fallen behind even HANDCRAFTED gear. As per Gninja on the EQ2 Forums, the effort to remedy this imbalance continues:

We are going through the relic stuff and making sure the stats are correct. There were a few that were too far off and we are correcting those. Having said that the changes being made might not be drastic in every case, but when you kill stuff in raid the loot should be an upgrade in most cases. Obviously we can’t hit every item in the game but there should be items for every slot for every class in each of the different types and difficulties of content.

Players found a bug with Wards on TLE servers sometimes being zeroed out/missed. Caith has confirmed the issue and we hope to see a fix soon:

Found the bug in original coding for wards, it’s fixed for next hotfix. Multiplying by 0 [zero] is no bueno.

Finally, I’m happy to report that bug preventing zones from progressing, including Stygian Threshold as well as Castle Highhold‘s gates refusing to open is in the process of being fixed.

Tonight is the last night of Frostfell until later this year, while tomorrow sees the unlocking of Kingdom of Sky on the Time-Locked Expansion servers. Meanwhile on live servers, in addition to a number of content fixes, we will also see a potentially significant change to AAs. Abilities that used to grant Crit Bonus will now grant Potency instead.

Finally we must say goodbye to a feature that has worked inconsistently at best for many years but must have proven too difficult to fix. With tomorrow’s update, the PvP Arena feature will be disabled in EverQuest II, with the rewards from that content, including unique house pets, being moved to the Loyalty merchant.

Maldura: Algorithm For Destruction [All Versions]