Terrors of Thalumbra has been out for over two months, and some players may just now be coming back to the game after a break, or have been playing the expansion but want to get better. With Terrors of Thalumbra, the token grind to add colored gems to gear has given way to dungeon dropped-armor, jewelry, accessories, and weapons which are then upgraded through Infusing.  Add that to Reforging, Adorning, and other game systems and there is quite a lot of “homework” just to play EQ2 these days. Before we go any further, I do not hold myself up as any kind of authority on game itemization or mechanics. Much of this information has been acquired through extensive discussions with other players or personal experience, which likely does not reflect “end game” EQ2.

The Signature Line, and Beyond!

Terrors of Thalumbra is a complete leapfrog of past expansion’s gear. With the exception of a few heroic items, all Ethereal weapons, and some raid gear, the Terrors of Thalumbra quest gear will be an upgrade for you. If you are in particularly weak gear from 2+ years ago, you’ll want to track down a crafter to make you a few pieces. NOTE: The ToT Mastercrafted gear is on-par with the Advanced Solo drops.

I consider the Signature quest “Underdepths Saga” to be mandatory for four reasons:

Terrors of Thalumba follows the now established pattern of Advanced Solo, Heroic, and Event Heroic zones, however there are a few twists. After the punishing difficulty of Altar of Malice heroic zones (before they were adjusted), the Terrors of Thalumbra zones are in a more casual-friendly state, and so players should give each zone a try before assuming they’re impossible.

In the Altar of Malice, a dozen timed overland quests provided some variety to the content, and another opportunity for solo players to acquire expansion tokens. In Terrors of Thalumbra, because the importance of expansion currency has greatly diminished, a different reward was added for completing this gaggle of timed quests — a Gold, Platinum, or Umbrite chest. The rewards range from Advanced Solo and Heroic drops to Mythical ranged weapons. If you’re wondering why players are running these timed missions every three hours like clockwork rather than grouping, the rarer rewards are just that good.

Not everyone is a fan of how these timed quests and the [eq2u]Dirt Encrusted Key[/eq2u] seem to have replaced grouping in some circles. There have been numerous threads such as this one. The rewards from these treasure hunts are nowhere near as good as the Heroic zones, but there is that super-rare chance of an Umbrite chest, which can award a Mythical item. Considering the Ethereal loot chase last summer, it’s no wonder players are spending every waking moment chasing keys.

Guide to Timed Quests in Thalumbra

It seems we’re not done with duck humor, as a mysterious zone was added to the expansion. Every 12 hours, plus or minus 30 minutes, a portal appears in a burst of feathers and one lucky player who is in the process of killing any mob in Thalumbra is sucked into a solo instance which rewards a choice of Mythical Helms. There are numerous threads.

This video may contain NSFW language, etc. I have not watched it.

Until the Rum Cellar campaign appeared, most Altar of Malice-geared players had an obvious choice for Weapons, Cloaks, Belts, and Ranged Weapons. I’m talking about Mastercrafted/Refined/Experimented gear. These trumped most of the heroic drops and thus became very popular. Rum Cellar did eventually upset the apple cart with a more powerful Belt, but otherwise these crafted items remained powerful.

With Terrors of Thalumbra, the bonus from Refining has shrunk from 10 to 5% and the Refining process boosts fewer stats. Some people are still having success with Mastercrafted gear, but it’s a less obvious “slam dunk” this time around.

Rather than a token grind and “gemmed” versions of Heroic and Raid gear, Terrors of Thalumbra itemization is built on the idea that you acquire desirable Armor, Jewelry, and Weapons, and then spend months improving them through the Infusing system.

Infusing is done through the Equipment Infusion and Deity Abilities window. There are two boxes where you can drag items. The left side is for your armor, weapon, jewelry, etc. The right side can either be left blank, meaning you will spend Platinum to improve your item, or you can place a crafted, dropped, or purchased Infuser on the right side and then click Infuse.

Infusing is rather complex and if you want to dive into the math headfirst, you’ll want to read Konofo’s Infusing Guide. The short version is, you should always start with smaller, less expensive Infusers to bring the item up as much as possible, as well as building up the hidden failure multiplier. Then when you use more expensive Infusers, they will “hit harder”. Yes, infusers can crit. The math. It burns.

A lot has been written about the new RELIC flag which limits players to just one such equipped item at a time. Developers have told us that the RELIC flag allows them to place powerful items earlier in progression than would otherwise be possible. The choice is then left to players which one RELIC item they will wear. However this concept has been thoroughly torpedoed by a few popular items.

The best-in-slot Signature Quest ring is flagged RELIC. Nobody is going to give up that ring and the improvement in slightly better shoulders or some of the other drops out there is insignificant next to what would be lost by not being able to equip the Signature Quest ring.

The first wave of Class-specific cloaks were also RELIC-flagged, which led to much head-scratching, however these were later split into two sets of cloaks. One set of 26 class cloaks which rarely drop in heroic content have remained RELIC-flagged, while the raid-acquired ones are unencumbered by this limitation.

One of the benefits of having an All Access subscription, either through the use of a credit card or the tradeable Krono currency [link] is the ability to equip items with the new PRESTIGE tag. EverQuest II’s Free-to-Play model is the most generous in the MMO industry. However if you want to equip the best items in the game, a subscription is necessary.

Procs/Effects You Should Be Chasing

Aura Share — This expansion has seen an increase in “the more the merrier” type effects, where the benefit grows based on the number of players present. A raid force each wearing 2-4 items with this effect can be… formidable.
Mechanicha Aurabit  Search for More

Furious Barrage — This stacking effect boosts the Potency of your group by up to 166%.
Sinking Feeling  Search for More

Early Advantage [DPS] — The most powerful weapons in the expansion bear this effect. Each hit has a chance to do 8.9 million crushing damage.
Lacerator  Search for More

Brotherhood of the Underfoot — A buff to Crit Bonus and Potency for all group/raid members. The Signature quest rewards a choice of rings such as:
Moradhim Signet Ring  Search for More

Amplifying Combination — A different kind of teamwork effect, where the more people in your group who are wearing these items, the more your Crit Bonus, Potency, Weapon Damage Bonus, and Stamina are boosted.
Ring of Amplified Malice   Search for More

Deathtouch [DPS] — this clicky effect is like a limited Harm Touch or Devastation Fist. You click, they die.
The Polliwog Eye  Search for More

Deception — Fervor is an across-the-board percentage multiplier to your DPS or heals. See “I’ve got a Fervor” section below for more details.
Freebooter’s Cunning Search for More

Confidence [Tank] — Mitigation and block chance, the bread and butter of tanking.
Bracelet of Pemumbran Confidence Search for More 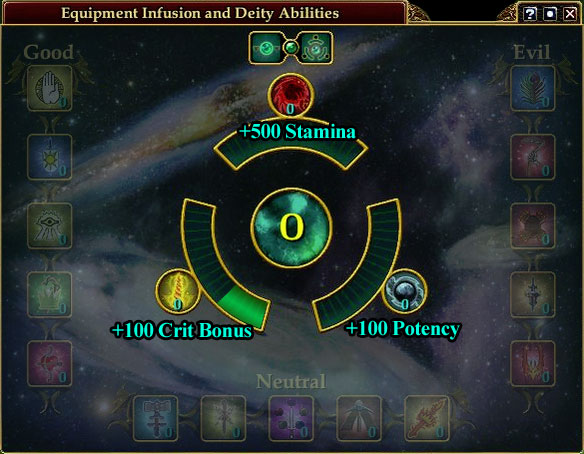 Terrors of Thalumbra expanded the Deity system with something called “Tithe” and a new Deity window. To give something for level-capped players to chase, some of your excess experience points (XP) are now returned as something called Tithe which can be spent to purchase Deity abilities or permanent stat buffs. Earning tithe earns Deity Points, of which you can have up to 10 at one time.

However the smart money seems to be on buying permanent +100 Crit Bonus, +100 Potency, and +500 Stamina from those circular things in the middle. Note that you have to use more and more Deity Points to earn each point of CB/Pot/STA as it seems to be on a huge diminishing returns curve. Prudent players will check their deity window every hour or so of vigorous gameplay to make sure they’re not sitting at 10 unspent points. If the prompt every time you spend Deity Points on CB, Potency, and Stamina drives you batty, here’s a workaround.

With Altar of Malice, we gained the unlimited ability to peel off and reuse Adornments. You should use this to your advantage to acquire and try out different combinations on your character.  When searching the broker, please note that there are now a dizzying selection of slight improvements on the same adornment type. For example these are all variations on the same rune, each with slightly boosted stats:

The level 96-100 versions also have an Adornment Set Bonus which awards an additional +6 Crit Bonus and +6 Potency for each one equipped. This can be rather confusing unless you carefully read the description.

When in doubt, check out Dethdlr’s Adornment Calculator. You can also load a character on EQ2U and then click the “Adorn Calc” tab to go straight to your character.

Exceptional Jewels: An Alternative for the Purple Cloak Slot

This likely falls outside the realm of “Heroic Gearups”, but you may have encountered Exceptional Jewels in your EQ2U or Broker searches. These purple adornments, which are not war runes, drop from the final raid boss in the Rum Cellar campaign. As they are tradeable, they sometimes appear on the Broker for extravagant prices. They are applicable to the purple slot on Cloaks. Not only are these adornments super powerful, but if you pick the right one, they complete the 8 piece Adornment Set Bonus if you are wearing the seven related adornments on the remainder of your armor. Again, read the descriptions carefully!

It’s beyond the scope of this article to pick and choose which War Runes (special purple adornments usable on Cloaks, Belts, Weapons, and Ranged Weapons) specific classes or players should acquire. It is important to look at how your class may be impacted by Statistic Caps and recent boosts to Combat Art damage for Scouts and Fighters, as well as the introduction of a cap to Weapon Damage Bonus. However this may be useful as a starting point…

I’ve got a Fervor!

Fervor, previously known as Final Ability Damage, is another multiplier applied after all other calculations have been made. Fervor multiplies damage/healing/etc after all other calculations. For example, if your spell would normally hit a target for 1,000 damage, after applying a fervor of 10%, it would hit for 1,100. The cap seems to be 150% based on the in-game stat going bright blue when this number is exceeded. One of the typical ways you will likely gain Fervor is to equip items with the Deception effect.