Imagine the ability to view a spreadsheet of your characters, your friends’ characters, your guild, or your guild alliance, all with their most valuable stats and gear scores (Stamina). Now imagine being able to sort this view by columns, add characters, hide certain guild ranks based on participation or perhaps if you have a main or alt raid force. Or imagine you’ve just joined a group and want to see what gear they’ve got, what upgrades they’ll be rolling for, or what areas you could help them improve on.

Today, EQ2U is happy to announce the introduction of the Gear Report!

We’ve heard from a number of guilds that hand-maintain such a spreadsheet, but there has been a growing desire to be able to automate such a view. Errrorr was the catalyst for this feature as he showed me a screenshot of the stats that their guild tracks for each character. Then I stumbled upon Soresha‘s EQ2 Data site where she has built quite a bit of this functionality for her guild. But we wanted to expand this idea outside of Guilds and allow any group of characters, even Guild Alliances, to build lists of characters and view their stats at a glance. 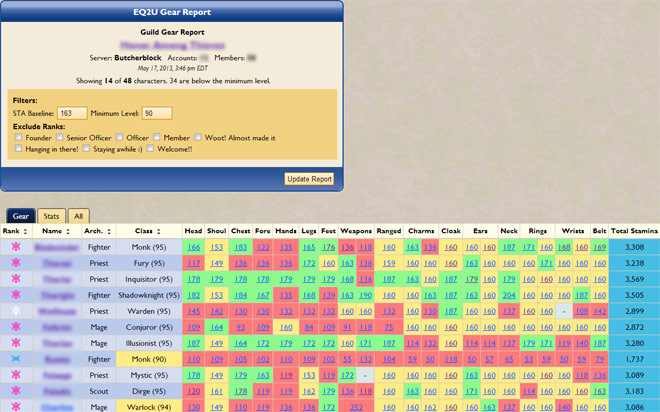 So how do you access this Gear Report feature? 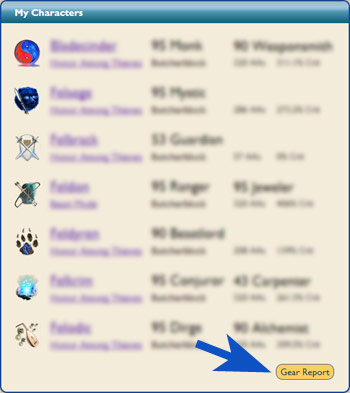 You can also access a Gear Report for any Guild by going to their Guild Details page and clicking the Gear Report button: 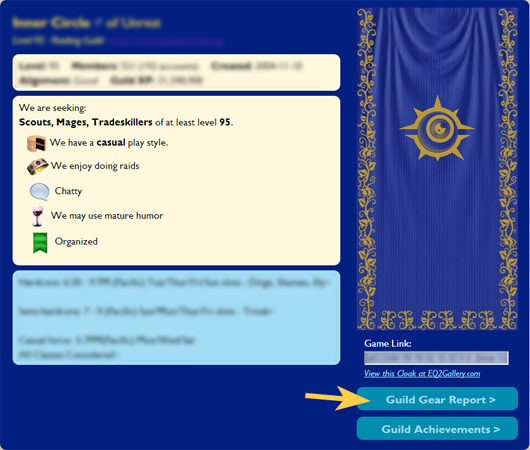 Finally, you can access a Gear Report from your Character Detail page: 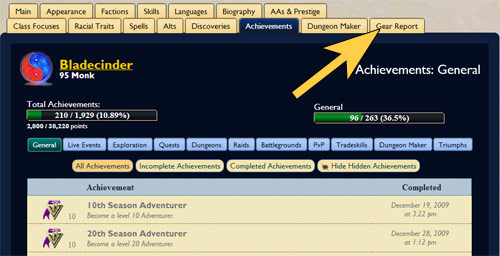 What do the colors mean?

At the bottom of each Gear Report is a blue information box which spells out in additional detail how the stats determine the background colors for the table grid. Different groups of characters and guilds will have different qualities of armor, jewelry, and equipment, so using the Gear Report settings, you are able to adjust the Stamina baseline as needed for your guild or characters.

By the way, I am open to feedback on the algorithms and calculations used to set the colors for fields such as Crit Chance, Crit Bonus, Potency, and Health.

What about Crafters and Soloers?

I really wanted to add a version of this page that reported on a number of Quests and other accomplishments, but there just isn’t enough of this data in the EQ2 Data Feeds to make such a view possible. I hope in the future when we get Quest data to have a whole other tab that shows which players have finished Drinal’s Steward’s quests, their Epic, Epic Repercussions, their Tradeskill Epic, The Coldain Prayer Shawl, etc. etc.