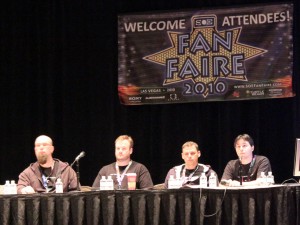 Update: As of 2:00AM CDT I have made some cleanup and additional information added to these notes based on memory. There are 3-4 missing questions which will get filled in after the video is reviewed.

Fighter heals — fighters are supposed to require healers not be able to solo everything. Paladin heal crit for example.

Ranger improvements as far as bow mechanics and weapon abilities.

Q: Necro vs Conjy dps
A: we can look into it

Q: paladins are a hybrid class of fighter/healer so it’s off balance to cut off heal crit for tanks.
A: heal crit affects different classes differently. Potency should be enough to make up the difference.

Q: dumb fire pets dying too fast. You said you’d fix this last year. Spirit shrine vs Oberon.
A: I wasn’t here last here.(laughter) we want to look at this.

Q: guardians do I go dps or survivability?
A: aa gives you the choice. Look at guardian fixes 2-3 weeks after gu57.

Q: zero range on ranger mythical.
A: (much discussion) for zero range the goal is rangers to be able fight at range instead of 5m. We will look at hit boxes.

Q: three sages, some of our healer/other pets are tagged as fighter class, which triggers a stun.
A: I can talk to Roger about checking if they are pets.

Q: ranger bow. Lower recast speeds. Hawk attack finding some use other than fun spell?
A: bow mechanics and bow item changes hopefully with guard changes. Then we will reevaluate.

Q: Mitigation calculations. ——
A: We will look into it.

Q: Can amazing reflexes be permanent or increased in duration?
A: This would be overpowered.

Someone saying Druids are not powerful enough in raids.
(audience heckling)

Crabbok: bruisers group utility. Can we hear something about the class definitions?
Rothger: there is not a redesign of classes coming. Just a clarification of what our design and view of classes are. We will talk about bruisers.

Q: coercer. Possess essence can lead to up to 10% of our dps. Can we make a possessed essence of a group member?
A: we can talk about it.

Q: Sanctuary not giving full immunity.
(audience: it’s 99%)
A: we will look at it and test it

Q: Templar death intervention outside of group
A: we can look at it

Q: can you make illusionist pet to stop mezzing during raids?
A: can look into it

Q: Why are zerkers so low on dps and survivability?
(huge audience outrage)
Q: I am in t3 gear and only auto attack for 5k
(audience: you suck!!)

Q: why conjurors have EB with no limitations compared to life burn
A: we can look at balance between conjy and necro.

Q: undead horde. No bodies left after you loot bodies.
A: you should get at least 3 from the AAs. We can look at leaving corpses up longer.

Q: cure curse is burned when casting even if recipient doesn’t need the cure
A: we will look at the possibility of making it like a resist. Also reducing number of cure curse required.

Q: possess essence stay up on death in the same zone?
A: we can look at it

Q: Why do bards have no blue AOEs especially as we use sound waves as a weapon.
A: we will write it down.

Q: possess essence doesn’t benefit from all pet gear. Necro spell control undeath not useful anymore. Requires mobs to charm. It randomly breaks too.
A: can look at coercer parses. And a content issue as far as no charmeable undead in raid zones.

Q: Druid charm animal.
A: can look at it.

Q: any plan to upgrade 50-60 unique spells like dps mod or sanctuary
A: no plan

Q: lot of jewelry has blue stats but no AGI.
A: there are 10 sets of gear. Look for the Dps scout gear or, if you can live without the AGI, Dps fighter gear.

Q: keep classes unique? (basically asking to undo the changes where rogues and summoners share the tasks of debuffing)
A: we strive to keep uniqueness of the classes.

Q: steadfast resolve should be 100% but it’s not.
A: could be a bug. Any specific mob or the ticks after the initial hit?
Q: it seems to be on subsequent ticks.
A: We can look at it.

Q: triple attack? Quadruple attack? Aoe auto attack more than 4 mobs.
A: looking at stats that are capped. The stat system isn’t where we want it to be.

Q: can reactive be held back if it’s not needed?
Rothgar: we can look at it.

Q: can healers cure arcane while stifled?
A: we can look at it.
Q: Druid AA serenity. Can’t cast it while stifled.
A: it’s a known bug.

Q: fusion at 5m
A: fusion is designed to be a risk (dangerous) to cast. Ice comet hits 1 mob. Fusion hits 3 mobs.

Q: smart loot
A: for velious we want to look more into smart loot. We have to maintain the balance to keep going back and doing content. We can’t do more of this in sentinels fate because some items aren’t tagged for class need.

Q: change melée combat arts for rangers to ranged?
A: we are having more discussion. Need some melée attacks at low levels.

Q: pets dying from AoE
A: can look at it

Q: bards and chanters are buff classes but some folks are already capped or we can’t really help people as much as we used to.
A: will look at stats and how they interact

Q: raiding illusionist here. Are we dps or utility?
A: even with the illusionist nerf to myth you should still be able to generate power. soothing mind proc doesn’t show up as credited for illy but is still useful for generating power

Q: paladin: can you throw us a consolation prize because of the nerfs?
A: we try not to nerf any more than is needed. So if we gave you something else to go with the changes, then you’d be OP again. Paladins should still be desirable even with potency, rather than heal crit, affecting heals.

Q: can we reward devs with stationcash?(chuckles)
A: talk to us after 😉

Q: thus is actually 5 questions. (ok, he got stopped at one, but it was a good one!)
Q: flurry for ranged attacks?
A: Yes.