Today we explore something near and dear to a growing number of crafters — the ability to “break out” of houses and build truly unique structures. 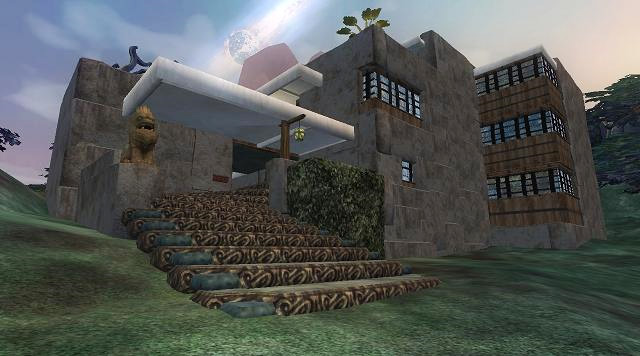 When Gorowyn was introduced as a starting city, we caught our first glimpse of the outside world through the leaded glass windows of our homes. While windows and skylights would later be added to Kelethin and Maj’dul housing, it was the Guild Halls that were the quantum leap forward into houses being part of a larger zone. They were surrounded by the entirety of Antonica and the Commonlands and it didn’t take long for players to discover that it was possible to “break out” and build in the outside world. With Game Update 58, each city’s most prestigious house gained balconies and terraces which, with some crafty placement of Teleporters, permit building out into the surrounding world.

If you have been looking at customizing your house to create a unique look, no doubt your curiosity has been piqued. It seems that everyone is busting out!  When the first break outs occured, there were no means to place items directly except using in-game controls. It took dedicated (and repetitious) nudging of teleporters to reach the outside world. Now with third party tools, the process has become quick and relatively painless.

We cannot underestimate the value of basic building blocks which have been added by the EQ2 team in the last 2 years. Domino, and the art and design teams have added a metric ton of functional and decorative items, including walls, dividers, tiles, slabs, etc., it is now possible to build an entirely new house from the ground up.

CSV is Your Friend

Since after the introduction of guild halls, EQ2’s Housing UI has been upgraded to allow loading and saving of our our house’s layout as an CSV file. By saving a layout to our computer, we get a text file which catalogues the names and locations of all the items in our house or guild hall. At first, players enjoyed the ability to pack up or restore a fully decorated house in seconds. Putting up last year’s Frostfell or Nights of the Dead setups took seconds, rather than weeks of tear-downs and rebuilding.

Load and Save Layout opened up many possibilities besides simple backup and restore. By editing these CSV files directly, it has been possible to position items with pinpoint accuracy, place items inside each other to produce new shapes, and finally design entire houses which have .

At first, the only game in town for editing these CSV Files was Notepad, but this has given way to a fantastic purpose-built Layout Editor program written by Jesdyr. This program understands EQ2 house layout files and allows you to manipulate them in creative ways. It offers the ability to move groups of items, as well as pitch and roll items in all 3 dimensions (not possible using the in-game mouse controls).

Layout Editor is under active development and new features are added on a regular basis. In fact a recent update added a powerful “New From Diff” feature which allows you to take 2 snapshots of your house and “subtract” one from another. The feature can be a bit of a mind-bender, but in short, it can greatly streamline your efforts when you are working on just a few items within an extremely complex home approaching 1,000 items.

Is this Legitimate? Is this Supported?

Players have been breaking out of guild halls and houses for almost 2 years now. Although SOE does not officially support building outside of your home, and invisible walls remain to keep all but the most curious players from venturing outside the roped off areas, we have had several responses on the forums from developers that they do not consider this an exploit and currently have no major issue with it or plans to eliminate this option.

It is always possible that for some technical reason, house “break outs” may be disabled or some areas removed from housing at a later date. Break outs are strictly unsupported and you should take pains to prepare yourself if you get “stuck”, such as decorating with a class that has Evac, or having some other means of escape handy in your inventory at all times. Update: Folks have wisely suggested that you can just type /house and click ‘leave house’ if you ever get stuck.

You should be aware that there are MANY areas outside of the houses which do not have a physical ground to walk on, even in places that appear to have terrain, rocks, ice, etc. It can be frustrating to “fall through the world” and be reset to the zone’s entrance as you are first finding these locations. There isn’t just one break out location for each zone, but the locations listed at the end of this article are considered some of the best ones because you can walk around a bit without falling through the world.

NOTE from Jesdyr: Layouts are saved using US standards. This means the decimal separator is a period and the file encoding is ANSI. If you use a text editor to change the files make sure that the file is not being saved in a Unicode or UTF-8 format.

We strongly recommend making a Backup of the arrangement of your house items before attempting the instructions below.  To do this, click on the door of your house and choose “Save Layout”.

If you feel at all uncomfortable with making changes to a text file or do not know how to back up the contents of your house using layout files, we suggest NOT trying the steps below.

Before you begin, you will need two house teleporters. These have been available from different World Events such as the Druid Ring and Wizard Spires rebuilding.

NOTE: In the Qeynos, Freeport, and Maj’dul houses, you can usually place the ‘break out’ teleporter just by pivoting the camera a certain way and do not need to edit a layout file. — added January 25

1. Place one teleporter in your house in an easy-to-reach location.

2. Click on the door to your house or guild hall. Choose “Save Layout”.

3. Type in a filename to save your layout on your hard drive.

4. Open the file you just saved with Notepad.

5. Remove all lines from the file but the first two. Your file should now look something like this:

6. Add this to the bottom of the file:

7. Replace the ‘LOCATION’ part above with one of the areas listed later this article. Your finished file should look something like this:

NOTE: Because we have used 0 (zero) for the second value, this will grab the first available teleportation portal from your house and move it to the location provided. If you have the databaseID of a specific housing portal that you want to move (reference a prior save), use that databaseID instead of zero.

9. Click on the door to your house or guild hall. Choose “Load Layout” and select the layout file on your hard drive.

You can read more about the Layout File Structure at EQ2Designers.

We don’t have a location for Maj’dul, but according to Cyliena:
Just zoom out while standing on a lower level of the balcony and you can place the teleporter outside. Same goes for New Halas. Don’t try to go up the stairs in Maj’Dul–it’s certain doom.

UPDATE! Jesder looked at this article and had some corrections which I have made. Specifically, the saved layout files are CSV format and not XML. And the instructions were not fully applicable to version 5 of the housing format. I have made this change as well.