I am no longer involved in the EQ2 Discord chat. You can access the EQ2Wire Chatroom here.

Players are always looking at methods to keep in communication with developers. Of late, the forums have been less than successful at serving that mission. Community has tried different things, including engaging us on Facebook, Twitter, and Reddit, however these social media platforms haven’t been adopted as much as they have in other games. Connecting the player community to the developers is something I am hugely in favor of and some methods have been more successful than others. I thought the old EQ2 ZAM Question & Answer sessions did rather well.

Yesterday, a new EverQuest II chat server was launched on Discord, which is a service available in your browser as well as through mobile apps that features both text and voice chat. It is independent of Daybreak Games and will be staffed by volunteer moderators and members of the EQ2 team. So far, Discord has been incredibly successful on other Daybreak games. 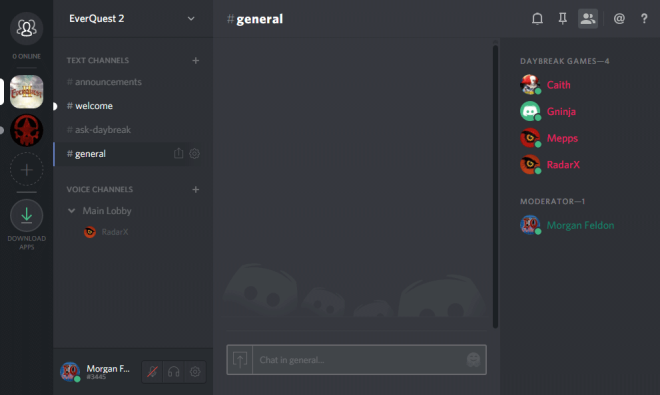 You may be asking if Community is already stretched so thin, why add yet another form of communication beyond Facebook, Twitter, Forums, E-mail, and In-Game chat? The answer is that this is an a third-party site that will be a shared effort between different people.

I am no longer involved in the EQ2 Discord chat. You can access the EQ2Wire Chatroom here.