Bristlebane Day is back! From Friday, March 25th through Thursday, April 7th, enjoy one new quest, a new collection, more merchant goodies and perfectly serious items to craft, as well as content from previous years. On Friday, April 1st we’ll celebrate The Highest of Silly Days in the Enchanted Lands with our good friend Imenand.

Niami has posted pictures of the new recipe and merchant items over on EQ2 Traders. TLE servers will have a special Bristlebane Day themed merchant, a Gigglegibber goblin, in both Freeport and Qeynos.

Too many alts? Get the Bristlebane Day quest tracker! Print it out or copy it to your own Google Drive by going to the File menu and choosing “Make a copy…”.

COLLECTION: Prankster’s Piece of the Pie
FOUND IN: Enchanted Lands, Sinking Sands, and the quest zones for Rescuing the Princess and Gnary a Joke to Tell
REWARD: Cloak of the Grand Prankster

When you go to collect a purple shiny for this collection and fail, it multiples. This will happen twice, then you successfully collect an item and the excess shinies poof.

Beastlords! There are two were-creatures that can be tamed in this quest instance if you have the Tame Exotic Warder AA.

April 1st only quests will be posted on March 31st.

QUEST: Tin Metal Protection
RELATED QUEST: Blat Bound
SUBQUESTS: Card Deals, Ogled Goggles, Wine for the Lady, Fribles’s Fate
OPTIONAL: Speak to Garple at -374, 31, 164 in Frostfang Sea to begin Blat Bound, who directs you to Blat in Antonica or Commonlands (can only be done if you haven’t begun or finished Tin Metal Protection)
TO START: Speak to Blat Berisen in one of the following locations:

You are sent to speak to Frethe Zizlop, who is found: 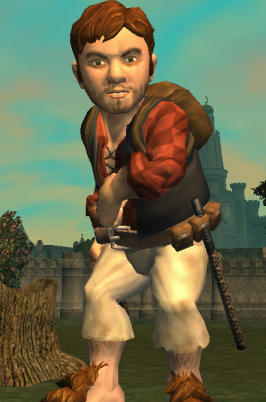 Zoe sends you to Barb Islenet, who is found:

Barb sends you to Abner Siblet, who is found:

Abner sends you to kill Belazzor Fribles, who is a triggered spawn found at:

Now you can turn in all the quests in the reverse order that you received them.

QUEST: Plethora of Patchcraft Parts
TO START: Speak to Rakshatta at -28, 0, 50 on the dock in the Enchanted Lands

This quest requires you to collect items from various Patchcraft creatures. They can be found in Antonica, Commonlands, Darklight Woods, Frostfang Sea, Greater Faydark, and Timorous Deep.

QUEST: Gnary a Joke to Tell
TO START: Speak to Galan Jokepeddler on the docks in the Enchanted Lands at 43, 4, 117

QUEST: Ratical
TO START: Speak to the Gigglegibber Hunt Master at -3, 4, 36 on the dock in the Enchanted Lands

You’ll be asked to kill a bunch of rats, including the Rat King. Killing any rat will update any of the steps.

Suggested hunting spots: Antonica, Commonlands (south of the wizard spire), The Down Below, The Peat Bog, Thieves’ Way, and Oakmyst Forest (mystail rats). In older zones such as Antonica you can wipe out possible placeholders such as snakes and hawks to raise the potential for rat spawns.

QUEST: Gigglegibber Scavenger Hunt
TO START: Right-click on the Gigglegibber Hunt Master at -3, 4, 36 on the dock in the Enchanted Lands; purchase the quest from his merchant inventory

None of the items for this “quest” exist. Just let the timer run out and your reward will be sent via in-game mail. The timer only ticks down while your character is online, but the quest will remain in your journal through logouts.

Because of how this quest is handled, it never completes and therefore never shows up in your completed quest journal.

You have 3 minutes to get as many points as possible:

Gelatinous bouncers will springboard you around. The fish bouncers spring you higher.

You need to hit a bauble almost directly to get credit for it. Smaller races may want to use a growth item, such as the Cloak of the Harvester or a Toadstool, to make this easier.

Collect all the items in this collection by gathering purple shinies in any of the zones above.

Once you’ve completed the collection, you can take your reward to The Grand Prankster (must have completed Tin Metal Protection) to have it blessed.

Collect Dreak’s Tin Spike from red shinies in any of these locations:

Collect the remainder of the items by gathering red shinies in one of these two tradeskill instances: