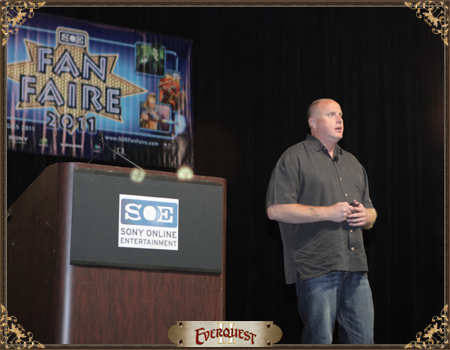 SOE President John Smedley continues to peel back the curtain on the thinking behind Subscriptiongate and why he is trying to make this right for loyal customers, while addressing the Accounting and Tax Law issues which SOE could ignore no longer.

First up, Smed posted his philosophy on game development and how these Subscription changes were never about squeezing players for more revenue:

When I read through all the posts here and on our forums, it never ceases to amaze me how people can think we’re just money grubbing jerks because we’re trying to make money.

I can tell you from the bottom of my heart that’s just not how we think. Most people I know in the games business are in it because there is literally nothing else they want to do ever. From the time I was in high school I knew that’s what I wanted to do. The same is true for a lot of people here at SOE and around the industry.

We’re in the middle of developing Everquest Next Landmark (on schedule right now for end of this month). We rebooted the game 3 times. It was a massive delay and it hurt us financially. But it was the right thing to do for us, and for the industry. Most importantly you all are going to get to play something we’re very proud of and we think is a whole lot of fun.

I believe a lot of this rhetoric is the result of us not being transparent enough, so we’re going to change that. I want us to start explaining the “why” in the decisions we make.. particularly the financial ones.

The changes we originally proposed would not have made us more money than the previous plan. Even if some people cancelled, though to be honest we thought our plan was pretty darn awesome and you would love it.

The same is true for a lot of the decisions we make. We’re trying to make life better for you, and yes.. for us too. But while some of those decisions are financially based, most aren’t. It’s usually something to clean up a tangled process or solve other problems.

So. how do we really feel about monetization?

We believe if we make great games, we’ll make money.

So I therefore am going to make it one of my personal missions to explain the thought process behind our business decisions. I want to be able to have an honest enough dialog that I can actually tell you “yeah this is important to our bottom line.. that’s why we did it”… and have you at least not question whether that’s the real reason. You may disagree with it, but at least you’ll be able to make a reasonably informed judgement as to whether or not we’re the greedy company some of you seem to think that we are, but at least you’ll hear the why.

My hope is that by doing this we can at least get people to say “ok. that makes sense.. I don’t love it but it makes sense and I’m ok with it”. And if you don’t, then we have work to do.

many more quotes after the jump. Smedley has been a posting machine!

On SOE being taken aback by customer concerns:

We didn’t expect as much backlash as we saw, but that wasn’t what changed our minds. In this case it was reading the “why” people were bothered that was persuasive.

We aren’t psychic. Well ok I am but most people aren’t. Which means we make decisions we think are right, but sometimes player behavior is different than we expect. In this case we really weren’t seeing the downsides or we would have put it up for discussion.

There are a whole [lot] of moving parts to our business. Companies like Riot have an advantage we don’t have – they started out as f2p. For us bringing our portfolio to f2p involves dealing with pre-existing playerbases. That makes the issue more complicated, we are also on multiple platforms. Again.. More complicated.

Anyways.. It if a ramble but wanted to respond to this.

On why SOE can’t just ignore the Accounting implications of virtual currencies, especially ones paid out to third-party artists (Player Studio:

Just to be clear here… we don’t care about the accumulation. That’s not the problem. The issue is the people who never log back in.

Sadly accountants around the world have decided (starting with the IRS) that the accounting for virtual items is done not even when we sell you the item (in most cases). If a person tops up $100 in their wallet…. and then promptly spend $50 of it… we can’t even recognize that $50 in the month we sell the items. we have to spread it over the expected lifetime of the player (yes we still have the cash). That’s actually how the accounting for these things works. And that extra $50 if it’s never spent sits on our books.

For those of you that think this method of accounting seems backwards… it is. I agree with you. The irony here is more and more states are starting to charge sales tax on virtual items.

Imagine this scenario – we don’t have to imagine btw.. we live it.

Same guy as above spends $100 to top up SC in Texas (one of the states that implemented this early).

He waits a year before he spends it because maybe he’s overseas on duty or something. We have to remit the sales tax on that $100 but we are unable to recognize any of that revenue until it’s spent.

For those who think SOE is just blowing smoke on the Accounting ramifications:

read this if you want to understand it better. Warning – that’s an hour of your life you’re not getting back and it’s boring.

On the costs of Planetside 2:

If we could get 100M subscribers to each pay us a dollar and we could make every item in the game free we would love to do that.

In practice, our primary job is making fun games. That always comes first. PS2 was a $25M investment. We have to show a return on that investment. It really is that simple?

I genuinely believe we offer great value for the money and this perception does bother me. I can’t say we haven’t stepped in it a few times if you could sit in on the conversations around here you would understand that monetization is not the #1 topic around here.