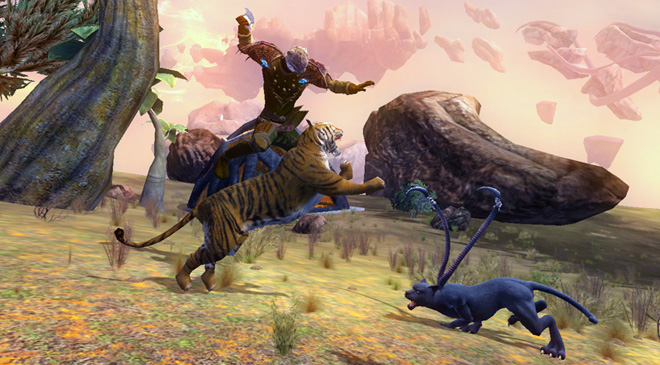 If you’re wanting to get the word out about your MMO’s upcoming expansion, you’d be a turkey to not focus your attention on multi-game MMO websites. Employing correspondents that attend gaming expos around the globe, these “Press” sites have come to expect a certain degree of red carpet treatment.

If I told most game publishers that I could guarantee a scribe from a popular website would show up to their event and write something (anything) about their game, and all it would take is throwing in airfare, hotel, press passes, and maybe an exclusive meet-and-greet or dinner, most publishers couldn’t write the cheque fast enough.

Press sites are one of the smartest places to drop a few bucks for a potentially big return. People have decried the lack of advertising in EverQuest II, while Press sites like TenTonHammer and Massively get thousands of eyeballs on their sites every day. There’s always a chance that an article about EverQuest II could bring back old players, or attract the interest of a gamer new to MMOs. Some would call this kind of quid pro quo a necessary evil, but these days, it’s just the cost of doing business. Last week, we saw plenty of that business with a series of tweets as these sites went through the Age of Discovery dog-and-pony show that is the Press Tour.

This Thanksgiving, we wanted to take a moment to be thankful for those EQ2 Fan Sites that didn’t go on Press or Beta Tours, yet continue to support the EQ2 community not just once or twice a year, but every day. Although Fan Sites don’t bring new gamers to EQ2, a vibrant supportive community can sure help to retain existing players.

It has not gone unnoticed that the gaggle of EQ2 Fan Sites supporting EQ2 has shrunk considerably over the years. Fully 65% of the domestic EverQuest II Fansites listed at EverQuest2.com have gone  idle or offline altogether. Players have moved on, and relentless mechanics and itemization revamps have pushed time-pressed volunteer site owners to the difficult decision of pulling the plug rather than throwing away hours of work to rebuild their sites on new data.

Meanwhile a host of new sites remain largely unrecognized. We wanted to rectify that by putting together our own list. I received a promise at Fan Faire that Fan Sites would get more support from SOE going forward. While we wait for that, I’m going to do my part to spotlight these great sites. I apologize in advance for any errors or sites that I’ve left out:

There have been a few sites over the years which have allowed you to study your Alternate Advancement (AA) choices outside of EQ2, but Brett‘s AA Calculator is the best by far, plus it’s been updated for Destiny of Velious. It’s not only an accurate recreation of all of the AA trees within EQ2, but it also provides you the ability to instantly spend (and un-spend) points in each tree, and then save a bookmark URL that remembers how those points were spent. Ask most people for a suggested AA setup for your character, and chances are, they’ll send you a link to Beetny.

Launched shortly after the introduction of Achievement points to EQ2, Xalmat‘s site documents over 1,300 Achievements, small and large, which you can accomplish in the world of Norrath from Quests to Raids to hugging complete strangers. If you just can’t get enough of Achievements in EQ2, I don’t know a better site to find them all.

EQ2Talk is a biweekly EverQuest II podcast by Dellmon and Aliscious. Each show includes a focused discussion about issues affecting the EQ2 playerbase, letters from readers, the nail-biting Are You Smarter Than a Dellmon? challenge, and guests to include EQ2 staff and others with a unique perspective on the game.

EQ2’s-Day (Tuesday, get it?) is a long-running biweekly EverQuest II podcast by Zanadi and Trueflight which has hosted a variety of EQ2 developers and producers over the years. The loose format encourages listener feedback via an IRC channel akin to the interactivity of a call-in radio show.

This slapdash after-hours podcast features larger-than-life Jethal Silverwing and his co-host Elquinjena as they cover a variety of topics and themes each week. With segments like Ask a Drunken Dwarf and parody songs performed by Jethal himself, it’s a variety format which has also attracted no lesser guest than SOE President John Smedley himself. The Jethal Silverwing Show is part of Kithicor.org.

Have you ever wished you could track your completed quests without having to log in your character and dig through the Completed Quests window? If so, your wish is Mazahs‘ command. Fluffy.dk contains virtually every quest in EQ2, and using the available plugin, you can have an automatically updated list which can be viewed anywhere online.

Every crafter worth their jumjum pie is aware of Niami Denmother‘s exhaustively detailed Crafting previews, reviews, and expansion guides written from a tradeskill perspective. If you want to be prepared for upcoming Events, Game Updates, or the next Expansion, look no further than Niami‘s detailed guides.

EverSeek is an online database of over 5,000 house-placeable decorations and items available within EQ2 from Events, Quests, Tokens, Looted, and via Crafting. A complete (or nearly so) index of Recipe books can be browsed to quickly find the item you’re interested in. One of the oldest sites on our list, EverSeek has existed in one form or another since 2005.

If you are looking for a site with How-To Guides on house decoration, including example photos and guides to creating aquariums, kitchens, libraries, bars, bathrooms, bedrooms, themed houses, etc. then Elayine‘s EQ2 Decorators site should be on your visit list.

We would be remiss if we did not mention Jesdyr‘s EQ2 Layout Editor which has allowed the precise placement of house items, including pitch/roll and placing items on walls, floors, ceilings, and partly inside other items to produce incredible effects.

This one-stop resource for researching and documenting EQ2 Heroic and Raiding Strategies requires simple registration before you too can unlock its wealth of knowledge. Formerly known as EQ2Zone.com.

If you’re looking to beef up EQ2’s User Interface, download an all-in-one UI replacement like ProfitUI, Fetish, or Drums, or want to try your hand at the arcane and bewildering language that makes up EQ2’s UI, look no further than EQ2Interface. This site catalogues every UI add-on and replacement for EQ2. EQ2Interface is also the home of EQ2MAP, the most popular UI addon for EQ2.

There have been Adornment sites over the years but the best of the bunch has been Adornments.h0b0.net. Although it has not been updated for Velious, it’s still a useful guide for level 1~80 player-made adornments. If you’re looking for Velious adornments including player-made (white), yellow, or red, then you ought to check out Dethdlr’s Adornment Calculator hosted here at EQ2Wire.

The answer to the question “How do I get better?” usually starts with downloading and installing Advanced Combat Tracker for EQ2. This powerful log parser has grown leaps-and-bounds over the years and now supports all sorts of plugins, in-game triggers, and even other games. If you don’t want to play EQ2 “by-the-numbers” or feel no need to have your gaming performance “measured”, well hey, it’s a game not a job and that’s absolutely your right! But I think everyone could gain something by seeing how the spells and combat arts they cast affect (or don’t affect) the enemy.

Every year, the EQ2 raid designers add more Curses, more calamitous Area-of-Effect hits, more Detrimentals, and more one-person-can-get-everyone-killed timed Events. In the raiding arms race, the players have been forced to get better tools too. Advanced Combat Tracker used to be enough, but the Curses have gotten faster and AoEs more brutal. Faced with these issues, crafty players have developed several tools which take the strengths of Advanced Combat Tracker and link the members of a raid together to allow faster reactions, more awareness of what’s going on in a raid, and also the ability to chat if someone gets disconnected.

LootDB is a community-driven EQ2 item database which makes use of a client program to grab items and submit them to LootDB. One of the site’s strengths is the ability to browse by zone or by mob (enemy). At last count, their database contains over 100,000 items, many of them with dungeon, mob, and drop rate information.

If you’ve got the name of one of the tens of thousands of items in EQ2, and need that item’s unique link, your first stop is undoubtedly EQ2 Logger Links. The secret to their site is a client program which runs alongside EQ2 and grabs item links. At last count they have over 100,000 items logged.

This site has largely flown under the radar as an EQ2 fan site since they are, first and foremost an EQ2 guild portal. However their Xanadu EQ2 Items Database with over 5,000 items presents a great way of categorizing and displaying Heroic and Raid gear from the last few expansions. Despite the recent dissolution of the Xanadu guild, the database has so far continued to get updates.

If you are looking for the “backstory” or history of EverQuest and how it ties into EverQuest II, the EQ2 Lore Forum on the official EQ2 forums, the Athenaeum, and the Archive of Ik are your three best places to go. You’ll find no more complete bibliography of EQ2 books than BiblioNorrath.com. The site was lovingly developed by Aurelis who has moved on to other things, but we hear that it has been picked up by another player.

Ask any EQ2 player who has been around for more than five minutes which website they look to for quest writeups and timelines, and EQ2 Wiki or EQ2 ZAM will be at the top of their list. EQ2 Wiki is completely dependent upon volunteer player submissions for its information.

Formerly known as Allakhazam, EQ2 ZAM is the granddaddy of all currently maintained EQ2 websites. Its coverage of EQ2 has grown a lot in the past three years under the stewardship of Calthine and Cyliena and includes the most comprehensive writeups for solo and event questlines available. The centerpiece of the EQ2 ZAM site is their item and recipe data provided by SOE which includes Quest Dialogue, Drop Rates on items, etc.

I received a promise at Fan Faire that Fan Sites would get more support from SOE going forward.