Everyone that pre-orders Kunark Ascending gets immediate access to the beta servers. Playing Kunark Ascending on the Beta server also has perks for your live server accounts! There is more information coming soon about the rewards players will be able to earn by testing expansion content on beta.

Tell me more about the Kunark Ascending expansion!

After the jump, the necessary information to help you get started in Beta…

How to provide testing feedback:

Is there a Beta Buffer?

How to copy your character over to the Beta server:

To patch and get into the Beta servers:

Just as it was with Epic 1.0 in the Kunark days, the Epic 2.0 quests will NOT appear on Beta. They will go live when the expansion launches on November 15th.

If you are still having trouble accessing the Kunark Ascending beta, contact us in the EverQuest II Discord chatroom!

We look forward to hearing your feedback about Kunark Ascending and seeing you on the Beta server!

A: The Kunark Ascending beta requires you to purchase the expansion (either the Regular, Collector’s, or Premium editions) before being able to Beta test.

Q: Where are the Beta forums?
A: The Kunark Ascending beta forums are accessible from the link provided.

Get to EverQuest II Beta in 15-30 Minutes

Once you switch to Beta in the EQ2 Launchpad, the launcher will start downloading the entire Beta client including 18GB of data. You can reduce that to less than 1GB (and reduce patch time to 15-30 minutes) by following these instructions…

1. If your EverQuest II launcher is running, close and reopen it.

2. Click the game version (US English, etc.) in the lower left corner next to “Version”: 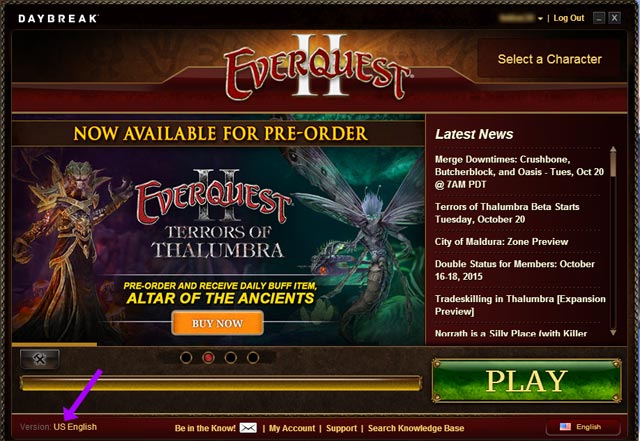 3. Change the Game Version to “Beta” and click “Apply”: 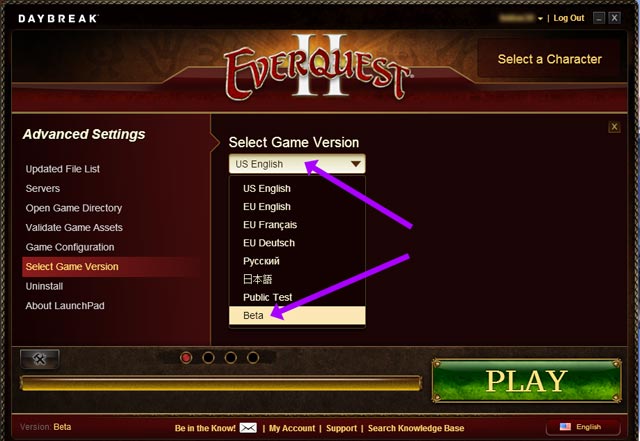 4. Allow the Launchpad to start downloading and run for 60 seconds. Now proceed to step 5.

5. Click the Gear icon in the lower left corner of the Launchpad and then click “Open Game Directory” to open your EverQuest II folder.

6. CLOSE the Launchpad and then follow either 7a or 7b below:

7a. FULL DOWNLOAD (default): Ctrl-click on your music and paks folders, and then press [Ctrl]-C. Click on your BetaServer folder and press [Ctrl]-V. It will take a few minutes to copy your live files to beta.

7b. STREAMING: Click on your assetcache folder, and then press [Ctrl]-C. Now click on your BetaServer folder and press [Ctrl-V]. It will take a few minutes to copy your live files to beta. 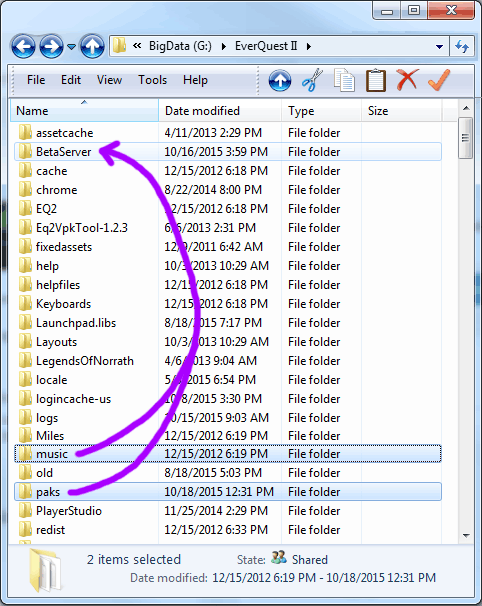 8. It will take a few minutes to replicate your EverQuest II graphics and music files from Live to Beta. You can click “Replace” whenever prompted to overwrite any files.

9. Now that the copy is complete, re-run the Launchpad and it will take another 15-20 minutes for patching to complete. 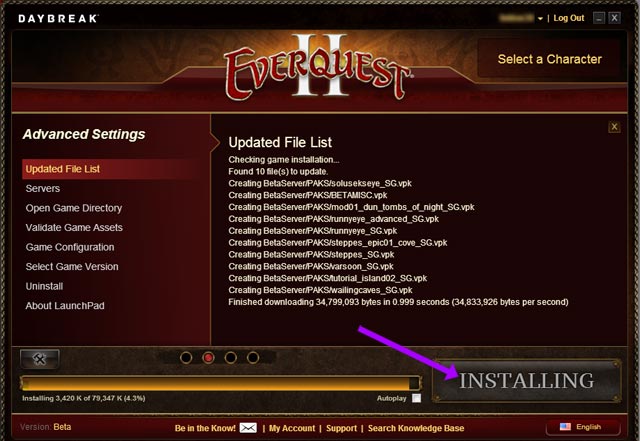 10. Click Play! If Beta is up and running and you have been invited, you will now be able to play.

CAUTION: Do not copy the entire EverQuest II folder into your BetaServer folder as there may be potential file conflicts which could cause problems playing the game — also you don’t want to copy over your Logs and Screenshots folders to Beta as this is just a waste of space.

NOTE: If you use a custom UI such as ProfitUI, DrumsUI, DarkUI, Fetish Nightfall, etc. you will want to use the default UI until the authors of these scripts have updated them.

NOTE: If your Launchpad crashes before it gets you into EQ2, delete your \EverQuest II\Launchpad.libs file.

NOTE: If EQ2 Beta crashes immediately after launching, go to your main EverQuest II directory and copy the D3DCompiler_43.dll and D3DX9_43.dll files to your BetaServer folder.