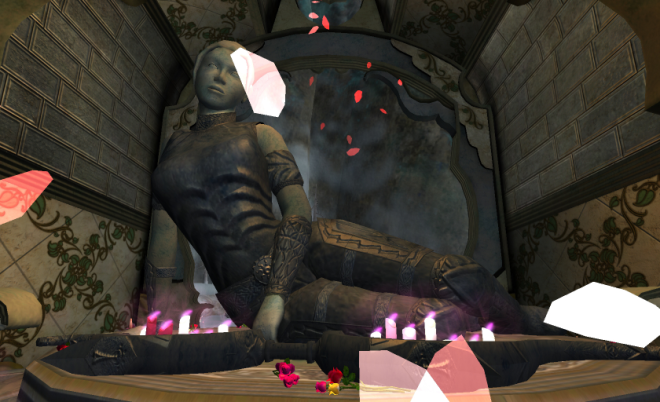 Love is in the air: Erollisi Day has returned! This year the event will begin at 12:01am PT on Thursday, February 4th and conclude 11:59pm PT on Wednesday, February 17th. There are two new quests, a new recipe scroll, several merchant items, and a handful of achievements to enjoy on top of all previous returning content.

Too many alts? Get the Erollisi Day quest tracker! Print it out or copy it to your own Google Drive by going to the File menu and choosing “Make a copy…”.

QUEST: Vision of Love
REWARDS: Erollisi coin x5, a Gazing Lover (house item)
TO START: Speak to Illixxol at /loc -342, 400, 860 in Stonebrunt Mountains
To find Illixxol, take the wizard spire to Stonebrunt and go east out of Quel’ule. Turn right at the end of the broken pathway, then head up the green.

NOTE: Only complex returning quest guides (as determined by Cyliena) are included below. Leave a comment if there’s other quests that would benefit from being listed as well!

If this is your first time participating in Erollisi Day, you must begin with this quest.

Upon completion you are directed to head to New Halas in the Frostfang Sea.

QUEST: Unforgettable
REWARDS: Erollisi coin x2
REQUIRES: Find ’em a Find, Catch ’em a Catch!, Bouquet of Trust, Harts Full of Trust, Sacrificial Trust
TO START: Speak to to Priest Aaronolis Swornlove at /loc 23, 148, -53 next to the Cairn of the Huntress in New Halas

QUEST: What’s Love Got to Do With It?
REWARDS: Erollisi coin x4, Flowering Pink Circlet, Intricate Tapestry
EXTRA REWARD: The Enemy Within (obtained during quest)
REQUIRES: Unforgettable, Shot Through the Heart
TO START: Speak to Priestess Annalisa Swornlove at /loc 8, 149, -63 in New Halas

QUEST: Love Potion Number One
REWARDS: Erollisi Mistletoe
TO START: Given by a volunteer guide on live servers. On Test speak to Brosha the Brokenhearted at /loc 51, -43, -837 in The Commonlands.

*This item will become convertible into a house item at a later date.

Erollisi Day has underwent many evolutions over its long history.

Did You Know? Many Erollisi-related quest names are titles (or lyrics) of songs!

* Selena is also Ulkoruuk’s real name!
** Bon Jovi [2004], Tina Turner [1996], and Madonna [1992] also have songs titled Thief of Hearts. All four variations (including Manchester‘s [1984]) have different lyrics.
*** Tainted Love was revamped with a different arrangement in 1981 by Soft Cell, a version that Marilyn Manson later covered in 2001