From Robert “Caith” Fouts on the EQ2 Forums:

We’re getting closer to Terrors of Thalumbra. So far, we’ve shared two zone previews (Thalumbra and City of Maldura), and we’ve talked about what’s in store for Tradeskillers. Now, here’s an introduction to two new systems that will be introduced with the expansion: 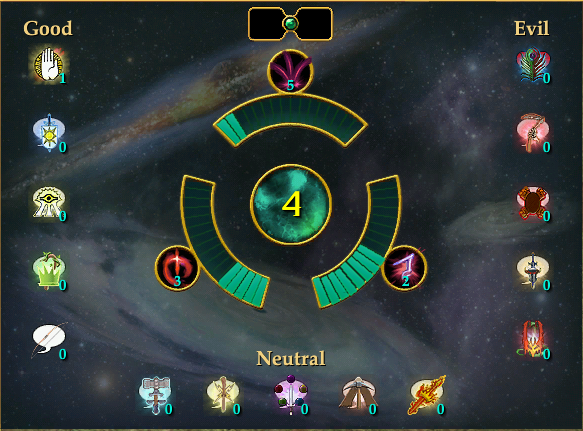 Deity Abilities
Delving into the depths of Norrath has awoken a deeper connection between the gods and the physical realm, allowing them to channel power more directly through their chosen instruments in the form of powerful new miracles. As you gain adventuring experience you will also gain tithe experience, and tithe points. Tithe points can be spent in one of two ways, the first is to purchase charges of these new miracles. You can only have a certain amount of tithe points banked or spent on miracles at any particular time. While you can purchase any abilities that match your city alignment as well as neutral abilities, the ability from your chosen deity from completing the existing deity quest lines grant will be at a discount.

For example, if your deity is Tunare you would be able to purchase the Lifeshield ability at a discount. This will allow you to use the ability more often as well as to hold more miracles as it reduces the amount of tithe points spent on that ability. You do not have to have completed any deity quests to make use of deity abilities.

The second way to spend your tithe points is to purchase passive increases to Potency, Crit Bonus, and Stamina. Each of these passive lines costs an increasing amount of points, the more you have the more expensive the next level will be. This means that there will always be a reason to be earning experience, and subsequently tithe points.

The deity window may be accessed through the main EQ2 menu, or via /toggledeity.

Equipment Infusion
The strange planar energies found throughout Subtunaria have invested the items found therein with latent energies granting them small bonuses to its granted stats when looted, which may be further unlocked to enhance the effectiveness of the item. In this example we have Cinder, newly looted from a chest so that we can see the stat bonuses that have been modified with the default infusion. Note the four grey numbers, which indicate the item’s base stat, with the green or blue higher number immediately following.

Infusion may be accessed by right clicking on an item in your inventory or with the /toggleinfusion. Within the infusion window you have two options on how to infuse the item. The default option is to directly tithe platinum to the gods, enticing them to grant you their favor which can unlock these bonuses, each subsequent infusion attempt will increase the platinum cost. Second is to apply infusers which can be crafted or looted throughout Thalumbra. Purchased infusions work toward one cap on infused bonuses, while crafted and dropped infusers work on an entirely separate cap. Allowing you to maximize the enhancements you receive by pursuing both methods of increasing your items power.

The picture below is using the default platinum tithe to further infuse Cinder. In this case it cost’s 5 platinum to attempt infusion, and it has a 25% chance of successfully infusing a stat bonus. 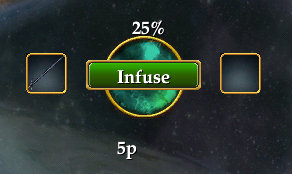 And here we are using one of the mastercrafted infusers, represented by the purple gemstone icon. You will note that there is no longer a platinum cost and that the chance of success is 100%. 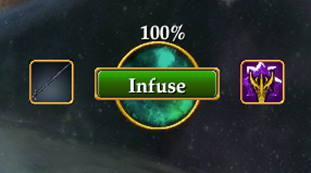 If an item is no longer able to be upgraded by a particular infuser, the chance to succeed will indicate 0%.

Terrors of Thalumbra is now available to pre-order. Pre-ordering the expansion gets you access to Beta, so you can test these systems and provide feedback.