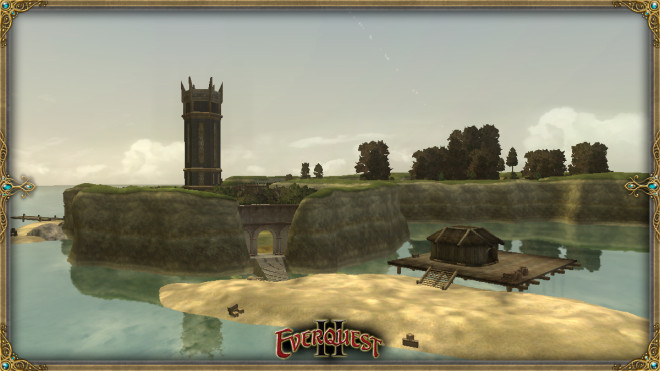 Tomorrow, to celebrate the 10th anniversary of the release of EverQuest II, the 11-year Veteran Reward will become available to all EQ2 players who have been around since day one. Why 11 years? The first four expansions (Desert of Flames, Kingdom of Sky, Echoes of Faydwer, and Rise of Kunark) each granted 90 days of bonus time, so add it up, and you get 11-year Veteran Rewards for a 10 year old game!

From Afista on the EQ2 Forums:

It’s been ten years since some adventurers first came ashore on the Isle of Refuge. For some, there’s nothing more memorable than the first time they set foot on the pristine beach while seeking refuge from the turbulent seas. The island was a place of new beginnings, where allegiances formed and adventurers learned skills that would help them survive in these new lands. Well, now it’s time for adventurers to return home where their journeys all began. On Tuesday, November 4, 2014, the Isle of Refuge Prestige Home will be available and adventurers will be able to have their very own private piece of history!

The Isle of Refuge Lore

What we know now is the Tranquil Sea was not at all tranquil when most of us last set foot on the Isle of Refuge. Some decades before the Shattering that tore the moon Luclin apart, a series of violent quakes lasting for several years threw Norrath back into upheaval and tore apart the once-familiar continents. During these years the seas were impassable and the loss of life was incalculable. In the aftermath of these cataclysms, there were refugees all across what became known as the Shattered Lands, and Qeynos and Freeport signed the Pact of Tserrin agreeing to accept and give shelter to any refugees who sought it.

Duke Ferrin’s Far Seas Trading Company fleet was the largest in operation and one of the few with strength and skill enough to survive in the still turbulent seas. They used a cluster of islands as the base of operations for the rescue efforts, and ships of the fleet delivered a nonstop stream of refugees to the isles for recovery and training before delivering them to the mainland. Refugees could speak to Ambassador Saera or T’Kirr to learn more about which city they would to make their final destination. The cities of Qeynos and Freeport, both struggling to rebuild, paid a generous fee to Duke Ferrin for each refugee delivered, and Duke Ferrin was equally happy to accept money from both cities without bias.

It is rumored the Far Seas Trading Company also established a secret stronghold among the other islands in the region, but since no other fleet was able to navigate in the dangerous waters, that has remained only a rumor until recently. As time passed and the situation in Qeynos and Freeport stabilized, the payment for refugees dropped and eventually the Far Seas Trading Company announced their services were no longer needed and closed off access to the Isle of Refuge.

The Isle of Refuge Prestige Home

The sandy coastline includes the familiar docked ship, a furnished water-side hut, and an excellent view across Razortooth Bay. Take a swim in the bay, if your dare, and discover the sunken relics on the sea floor! 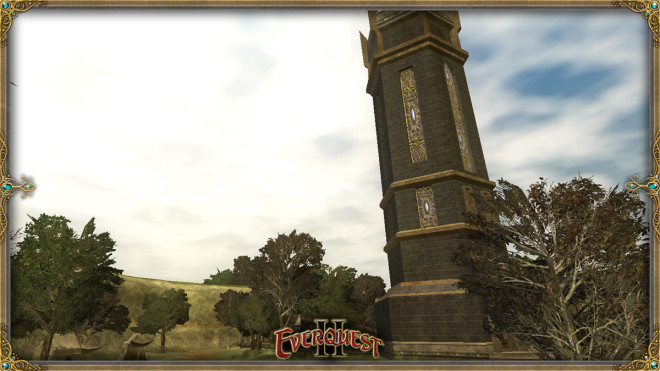 Head inland to re-discover Malvonicus’ Mage Tower, complete with the basement-instanced space, and practice your combat skills at the training grounds. An open-air pavilion is also waiting for ex-refugees to once again walk across the wooden planks. Will your tradeskill apprentices and house actors bring action back to these once bustling centers of trade? 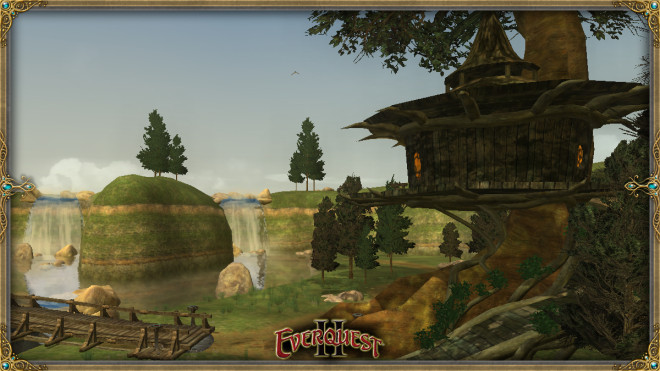 Embark on a journey across the Isle and down the path of the once goblin and spider infested woods. The High Chieftain’s Treehouse still stands just beyond the bridge and overlooks the meadow waiting to be explored. There’s beauty in the serene waterfalls, but the shadows are dark and foreboding. Are you brave enough to explore the depths of the cave instance that was once Grimgosh’s Lair or venture in the cemetery at the Unlucky Recruit’s End?

Whether you’ve just revisited the Isle for the first time in a decade or are just seeing it for the first time, you’re probably wondering: “How do I get my own Isle?!” We’ve got great news, because this home will be available to players a couple of different ways.

It’s understandable that all refugees did not wash ashore together at the same time. Brave adventurers arrived and sought refuge on the Isle for many years. So that all Norrathian refugees may have the opportunity to own this marvelous home sooner rather than later, we’re also making the Isle of Refuge prestige home available on the Marketplace as well!

In addition to the Isle of Refuge prestige home, there will also be a variety of new house items available that can help you bring your isle to life! Ten-year veterans will also one Isle of Refuge Population Pack per account, which contains a selection of the creatures and personalities that you may have encountered on the Isle of Refuge in times past. Some of these items will also be available individually on the Marketplace for players who wish to add additional items to their homes, but some of them, such as the replicas and the High Chieftain plushie, are unique to the veteran population pack. The Isle of Refuge Population Pack will include one of each of the following types of plushies, house pets, and replicas.

Plushies
Norrathians know it’s not Jaws you should fear in the water, it’s Bladefin! Rest assured this shark will deter unwelcome visitors from entering the waters. You may have encountered some of these creatures during your time on the Isle or in your adventures around Norrath and now’s your chance to bring them into your own home. They won’t walk or talk, but they can be resized. The following new collection of Isle themed plushies will be available: 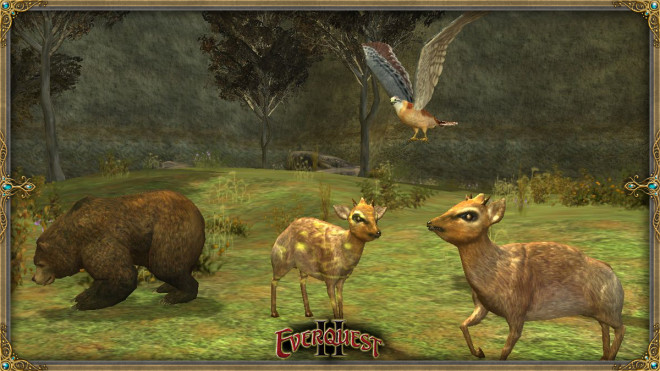 Housepets
Have you longed to see a goblin running across the island landscape once again? Do you want to liven up your coastal environment and have some crabs running down the beach, trying to pinch your visitor’s toes? Well, you can add some interest to your home with these new Isle of Refuge inspired house pets! You can customize names and resize these loveable pets to make them your own personal house companions, and then set them free to roam your Isle home. The following new house pets will be available:

Replicas
Have you been longing to look Duke Ferrin in the eyes again and ask him what happened on the Far Journey to arrive at the Isle? Maybe you’ll want to give Ebik tons of tinkered gizmos so he’ll never again be missing his parts again? Well, now you can! These replicas were created to immortalize some of your favorite characters from the Isle of Refuge. They can’t be resized or flipped, but they will happily stand in one place and speak some of their original dialog, complete with voice over! The replicas that will be available are: 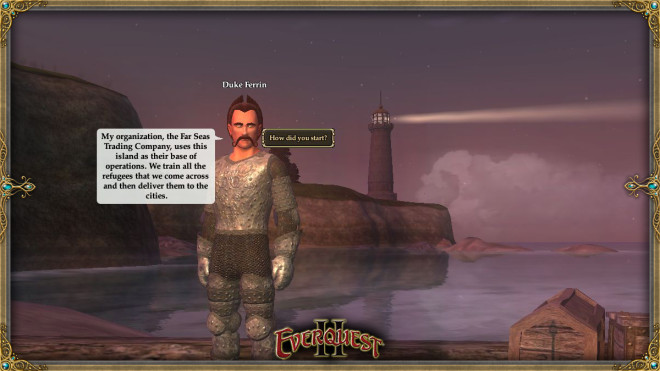 This nostalgic home and new house items will be available starting Tuesday, November 4, 2014. Do you have big plans in store for your own private Isle? We’d love to see what creations you come up with, so be sure to post them in our Norrathian Homeshow Forums or tweet them to @everquestii and use the hashtag #ReturnToRefuge!

After several questions about whether this was really “one per account”, Afista returned with additional details, including the revelation that the house would also be available for StationCash:

The Veteran Reward (which is the Isle house + population pack) is one per account.

Veterans receive the reward for free, but the house as well as some of the new house items will be available in the Marketplace for players who have not yet reached a 10-year status but still wish to access this prestige home. The Character Replicas from the population pack are unique and only available to Veterans. The replicas will not be available in the store.

and on the subject of flying Afista elaborated:

Yes, you are able to fly in the Isle home.

Since the island was never designed for flying characters, they had to do a lot of work to make all of the upper plateaus solid and usable. The team also added in the lake the feeds the original waterfalls in the upper area. There is really quite a bit of usable space up there now. As a player who enjoys decorating, it make me extremely happy .