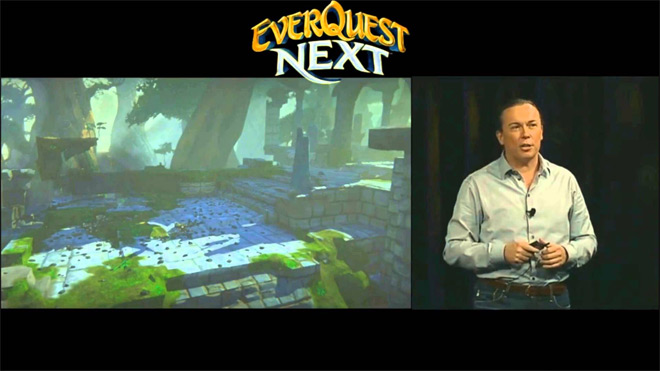 In a eulogy, it is customary to say positive things about the deceased. Now where to begin…

I played Landmark in Alpha and quite enjoyed what depth it had in the progression of harvesting nodes, huge array of crafting materials, compounding recipes, and choice of crafting tables. And I was blown away by what players were able to create. Inside of just a few days, players discovered bugs (unintended features?) with the engine that allowed the partial removal of voxels which allowed for incredible designs and nearly photorealistic structures to be created. While there wasn’t a whole lot of “game” per se, what was there had enough complexity to hold my interest. I had a genuine desire to level up my harvesting tools and get access to better recipes and spent hours harvesting and exploring the world.

In 2009 at the annual Fan Faire event in Las Vegas, the first hint that Sony Online Entertainment was working on a fourth MMO in the EverQuest series dropped in Jace Hall’s wretched EverCracked mockumentary. Not much was said except that work had begun. At the 2010 Fan Faire, SOE President John Smedley personally hosted two “EQNext Input” panels. All manner of topics were discussed, with the then dev team staying rather tight-lipped other than “choices would matter” and that the number of classes would be kept low. At least that’s what I can remember from the panel I attended.

As someone who attended the EverQuest II: Age of Discovery expansion panel, which was dominated by Dave “SmokeJumper” Georgeson promising the moon and stars, and then comparing that with the more down-to-earth feature pack we eventually got (Dungeon Maker and Tradeskill Apprentices being particularly unfinished), I had developed a skepticism that many of the gaming journalists and fan sites that would eventually cover EQNext and Landmark lacked.

In May 2011, SmokeJumper was promoted from Senior Producer of EQ2 to Executive Producer over EQ, EQ2, and I’m going to assume, EverQuest Next. With the EverQuest Next Reveal Trailer dropping in April 2013, it’s completely plausible that he spent those two years (if not more) at the reins. 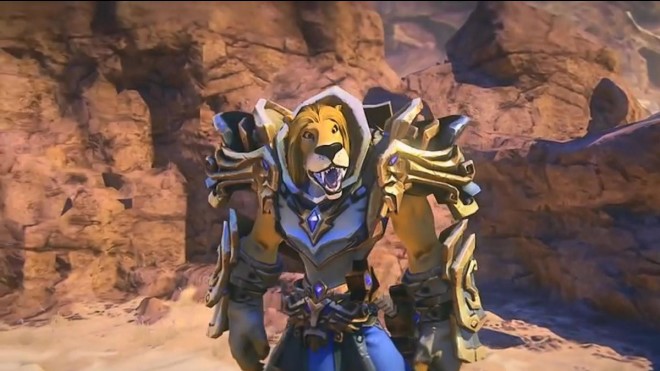 All of the complexity present in Landmark during Alpha was stripped out in a Beta update, which consolidated crafting and harvesting to a single table and just a handful of materials. This became a recurring theme during Landmark’s alpha, beta, and then brief existence as a published game — Major sweeping changes were made, followed by months of silence.

The Landmark building tools have been iterated over numerous times, but each fix seems to introduce new bugs. Today, it is not possible to place the award-winning buildings created in the early days of Landmark into the world without some sort of graphical distortion or corruption. Technical problems and design decisions hobbled the game and have driven away its already shrinking audience.

In recent months, as a sort of grim reality set in on the official Landmark forums, players have reported upon the number of active accounts logged into the game at prime time. Landmark has no Anonymous or Roleplay tag, so the number of characters online is accurate. The numbers at peak time hover around 120-150 players, with as few as a dozen online during the day. Considering the beefy server hardware required to maintain the game, the closure of Landmark is the logical conclusion of a simple financial equation. Still, I honestly thought that Landmark would be given a solid year to exist before sailing off into the sunset.

I draw no enjoyment in writing a post-mortem of Landmark, but I doubt anyone else will go into such depth. I also bear no ill will towards its development team that threw thousands of hours into this project in the hopes that it would be the “next big thing”. The excitement of the developers at SOE Live finally being able to showcase what they’d been working on for so long in the “black box” was palpable. Now, three years later, it is easy to look back at what little information still remains after the disappearance of the EQNext forums, website, and YouTube channel and draw the wrong conclusions. Here are mine:

With Sony Online Entertainment giving way to Daybreak Games and Dave “SmokeJumper” Georgeson leaving for funtirement on other shores, there were many in the EQN/L fan community who felt that the game’s hopes and dreams went with him. The Rerolled forums, recently respun as the Fires of Heaven forums, are a hotbed of player (and sometimes developer) discussion. Much of it bears a strong resemblance to an average EQ2Flames rant, however some of it includes genuine, credible information. Reading the comments of three former SOE employees gives some insight into what really went wrong.

Dave’s direction pushed Landmark into being a game instead of just the tools to create the voxel world.. In some way, you could say this decision ultimately caused EQN to be cancelled.

Landmark began as nothing more than the tools to make EQN. Then ponytail got a wild hair up his ass to make it a game, which ultimately killed EQN. Developmentally, Landmark and EQN were the same on the engineering side for a long time because they had obstacles to overcome which applied to both. Ponytail is the main reason EQN never happened because he refused to let go of Landmark as a game and wasted years of resources in trying to brute force it into being. The designers on EQN wrote hundreds and hundreds of design docs, often rewriting them as goals changed because they had no actual tools to make the game yet.

Smed gave Dave free reign over EQN because he knew Dave had passion for MMOs where Smed did not. Smed’s real blame here is trusting Dave too much and not keeping a closer watch on things. Also, Dave is incredibly good at the smoke and mirrors game. That and self-promotion are probably his two best skills.

Basically all the systems like pathing, AI, voxels should have been prototyped and tested with placeholders during pre-production. Instead (not going to speculate as they might have had their reasons) SOE decided it was a good idea to hire designers, writers, an entire floor of artists and announce a game without even knowing if any of these components were going to work together or if it was fun. The worst part was to have to do fake demos for SOE Live (the NPCs running around in the 1st gameplay reveal? they were controlled by actual people as there was no pathfinding).

…the decision to publish Landmark was not driven to sell something to players. It was done to show that SOE had a pipeline of products so it would be more attractive to prospective buyers (and Sony was really annoyed at them losing so much money and they wanted a game out asap). compared to what SOE was burning in payroll…the Landmark revenues were negligible.

Landmark was a disaster. It should have remained a toolset for building EQN and nothing more. I can clearly remember Dave saying things like “The creation tools will be simple to use and the most powerful ever seen”, as if somehow those 2 things can co-exist. Sorry, but no. Easy to use should have been the focus, and that sadly never happened. They always had a ridiculous learning curve to do anything beyond basic sh*t. Locking all those special tools behind progression was also a REALLY dumb idea. Yep.. let’s PREVENT players from doing cool stuff until they’ve made 100 dumb swords, and harvested 100 plants. If I had my way, everything would have just been open to use.. Go nuts creation mode.

The majority of the really crazy sh*t the voxel tools could do was by pure accident with the system trying to comprehend what the ‘player’ really wanted to do. We (other team devs) repeatedly told them they needed to make things easier to use to increase critical mass involved, and were repeatedly told to mind our own business, you’re stupid, and on and on. Micro-Voxels, Zero-Voxels, whatever the **** you wanted to call them was the engine trying to resolve something unintended, and coming out with something interesting and useful. It wasn’t planned in any way, shape, or form.

Let’s be clear too.. Landmark was Dave’s obsession, and there simply was no way to convince him otherwise about it being a game. I believe this ultimately killed EQN.

SOE/DBG had/have some absolute wizard level coders in the company.. Steve Klug, Terry Michaels, Jenn Chan, and several others are BRILLIANT people.. But with any project when you try to brute force it with sheer numbers, you get some jackasses in the mix too.

There was a lot going on behind the scenes between [Georgeson], Smed and Sony with budgets and the sale of SOE that took more than a year. Having said that Dave approached the project with the wrong assumptions and when the market pushed back he doubled down on his mistakes. EQN was his responsibility and he blew it, and Smed should have removed him sooner when it became clear what was happening.

Not a fan of him whitewashing his responsibilities and offloading blame to others.

In regards to CN’s hires, they are finally restructuring DBG from a money pit to a company that can turn a profit. This is why they finally appointed a creative director, a head of monetization, financial controllers etc. Under Smed it was a leaky ship that was hiring nice-but-ultimately-incompetent people that unsurprisingly attended the same church as him on Sundays.

EDIT: just to be clear I wish Smed the best. Ultimately he … really cared about games and gamers. He just built a broken process from which only broken games could come out. His new company is no different. I hope for his sake that he proves me wrong.

Of course these quotes will be dismissed as the words of disgruntled employees. I have never heard a more worthless expression than “disgruntled employee.” The opinions of a former employee are no less valuable than the opinions of a former customer or former anything else. Yes, they should be taken in context, but to dismiss them out of hand is to do the jobs of Public Relations and Human Resources for them.

EverQuest Next / Landmark was the game that launched a hundred fan sites and blogs. Even after eight years covering EverQuest II and SOE/Daybreak Games, I still have some optimism left that we might see a proper sequel to EverQuest that runs on computer hardware owned by mere mortals and is just plain fun. Have enough changes been made in the Daybreak organization to make the impossible possible? I hope so.