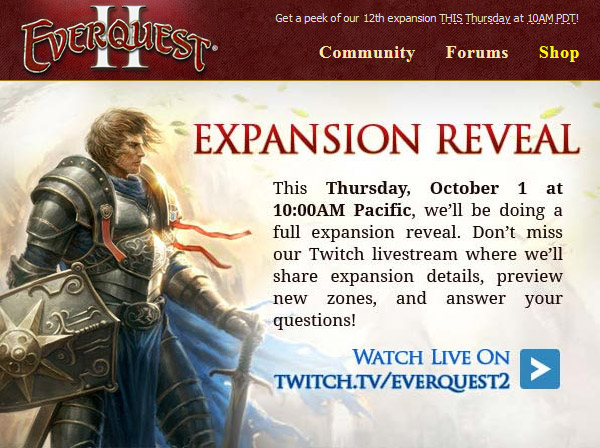 The EverQuest II Expansion 12 livestream will be starting shortly on Twitch.tv/EverQuest2 and we will be liveblogging it.

Some relevant quotes from the chat:

Windstalker: We will have an update on the Server Merges, the results of the Time-Locked Expansion vote, and we’ll be revealing the next pre-expansion Bonus.
Windstalker: I won’t be in chat for the duration of the stream. In fact, some of us have to go get set up.
Windstalker: preorder should be live at 10am
Windstalker: they are updating the web site…and we are supposed to be previewing the site…so ya…
Windstalker: The new site has Videos and Tooltips

Editorial: Can I just say it’s a bit nuts is to have the Pre-order and EverQuest2.com website revamp happen at the SAME time as the livestream? Everyone knows you roll out the updated website at the END of the stream.

Livestream has started, but there is no sound. Sound was fixed as of 1:04pm 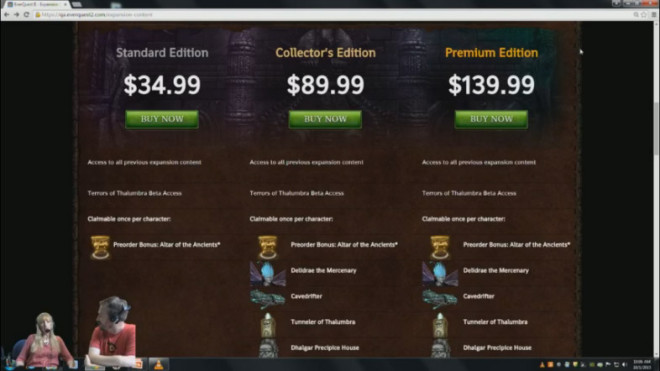 The $139.99 Premium Edition has a premium version of the flying mount which is upgradable. There’s an equipment upgrade pack with six tokens to upgrade equipment and three tokens to increase or decrease your weapon speed and damage type.

There’s a $34.99 Time-Locked Expansion pack that grants the 88-slot Bag of Dirty Tricks and some other items.

Editorial: Can I just say that Holly is flipping through things so quickly that there’s no way to cover it all. The collector’s edition items pages and expansion details pages have been flashed up for a few moments and then closed. 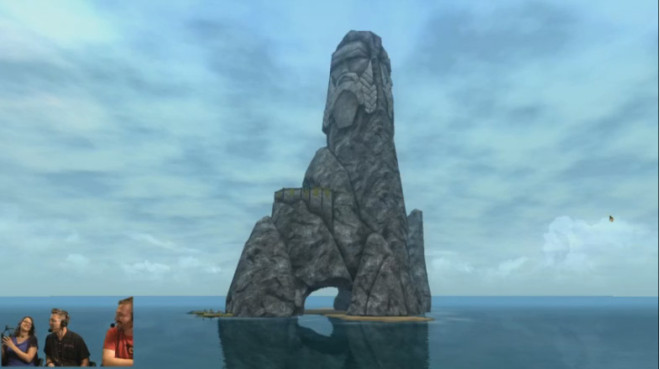 Domino is demoing the new prestige house which is a stone pillar/island in tthe middle of the ocean. She’s also demoing the house-placeable baby dragon (Burbur) which has a bunch of animations and designed by Aaron “Gnobrin” Bisnett. You can use a Petamorph wand to make your pet look like the Burbur. Domino is also demoing placeable house components such as stairs, columns, pillars, archway, etc.

Kaitheel is talking about the in-game prelude quest which rewards some house items which haven’t been available for several years now. When the Terrors of Thalumbra expansion goes live, you can jump right into the Signature quest. Kaitheel is now going over the city of Dwarves and city of Gnomes in the expansion and the threats they face. 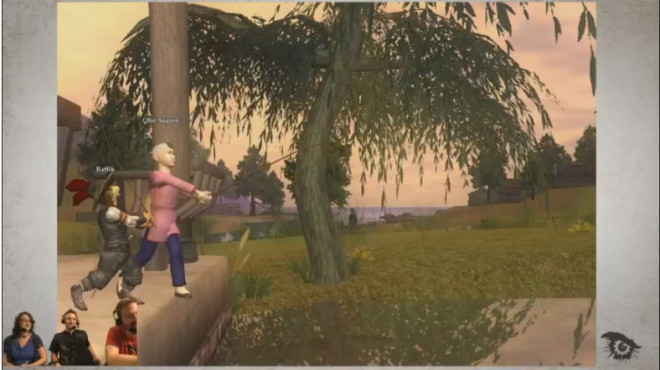 Domino is now talking about a new Tradeskill Signature quest which picks up with Captain Ethan. The quest, which has you meeting Qho again, will take you down into the new areas. Domino is showing off a new set of tinkered-style crafting stations that you can unlock. Completing the Sig quest will grant a new Relic item which can be used at level 100.

Roshen: Beta will be “lateish October”

Gninja plans to do scheduled Raid Tests during the expansion as have been done in past years.

Kaitheel: Quests in Thalumbra have more freedom and open-ended and less “on rails”. By not raising our level cap, we are able to play with this freedom and not guide you along as much. One massive underland zone.

Gninja: We retextured some of the mobs, but there are more NEW character models (enemies) than we’ve had in any previous expansion.

Kaitheel is continuing to fly through and demo areas of Thalumbra. Now we’re going to see one of the Maldura dungeons designed by Chrol. 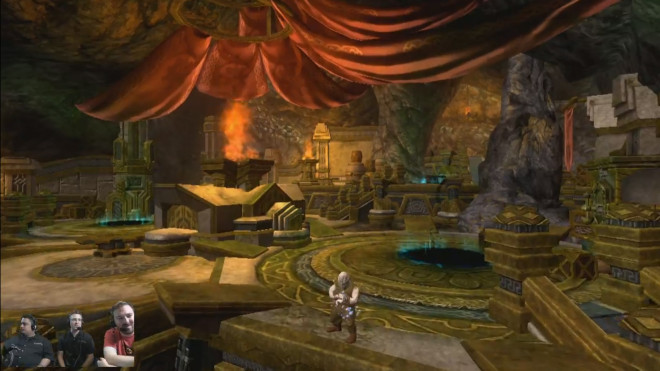 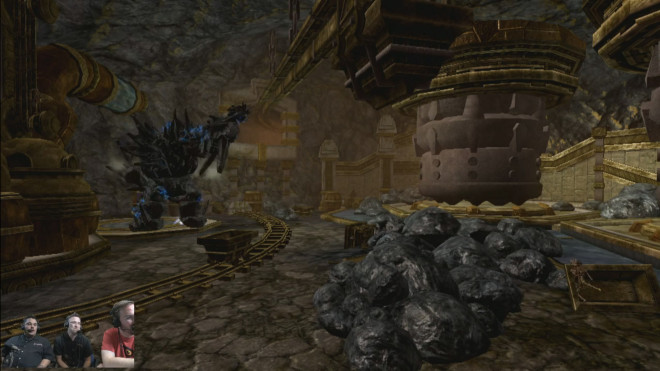 The Contested zone is also the zone being used for the Raid zone.

Gninja: This is just two dungeon themes we’re showing so far. There are more.

NOTE: The screenshot shown was very much a work-in-progress not indicative of what we can expect in the final version.

Caith: In the past, when we offered item upgrades, we removed your item and gave you a new one. It was an item exchange. The new system is a true upgrade system so the upgrade is actually added to the item.

<Caith> Feldon is very happy to hear this!

Caith is demoing how a mastercrafted item will be upgraded through the Infusion system. Right-click the item and choose “Infuse”. You can either use an Infuser item or you can try to spend Plat to try to upgrade the item. In the demo shown, there was only a 25% chance that using Plat would successfully upgrade the item, BUT even on a failure, it increases the potential bonus anyway. If you upgrade an item 4 times and only succeed on the 4th try, you’re still better off than if you had only upgraded it once and succeeded the first try. This will, of course, need clarification.

Upgrading with Plat looks to be expensive, but it won’t conflict with Infuser items that you get from solo questing, grouping, raiding, tradeskills, etc. Infusers have layers so they won’t overwrite/conflict with each other. If I use an Infuser item, it will be upgrading that item on one layer. If I am upgrading an item with Plat, that’s on a different layer.

These are called “Serialized Mods” and coexist peacefully with Refining and Experimentation. It will work alongside these with no issues. Infusing increases the base stats of the item. 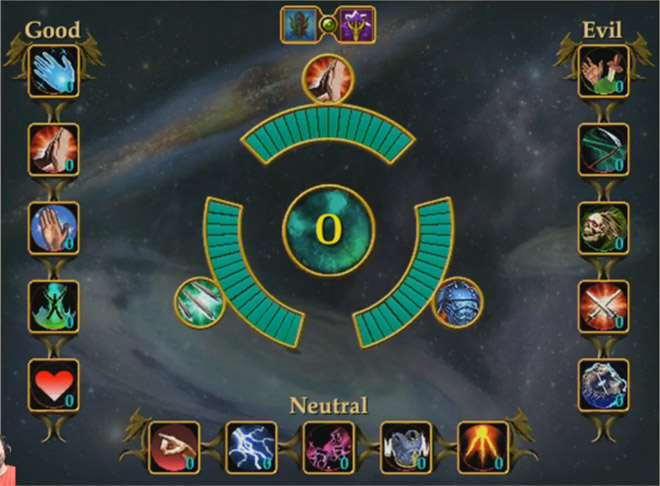 Can be accessed anywhere in the world. Similar to an AA system. Grants abilities based on different deities. Good can access Good and Neutral. Evil can access Evil and Neutral. This is not replacing or overwriting the existing deity system. These new systems don’t require you to do the deity quests, but there are bonuses for having done them.

New system called Tithe. For every XP point you get, you get 1 Tithe point. Tithe points are spent on new abilities. Something to use XP on when you are level-capped.

Caith is showing some of the Deity abilities. You can also spend Tithe points to permanently increase Potency, Crit Bonus, and Stamina. Basically this is a tiny bit like EverQuest where you can just keep earning AAs and getting minor increases in stats.

A new type of item. Much cooler and much more powerful. You can only have one Relic equipped on a character at any one time. One relic is from the Signature line. Some relics are rare drops. The Tradeskill Signature line also rewards a Relic item. Some Relics are class-changing. Some are NO-TRADE (typically class-specific), some are tradeable.

Update from Caith on the EQ2 Forums:

Currently the only place you will see a Prestige tag, is on a relic. Of which you can only equip 1.

Every single play style is going to have a way to get some of the best gear available. Tradeskills can make a best-in-slot item.

Desert of Flames passed the 2/3rd vote on both servers and will go live next Thursday.

We did some tests over the weekend. We are hoping to have our first merge of Butcherblock, Crushbone, and Oasis into Maj’dul in the middle of next week. Then there will be a break of a few weeks as Daybreak Games will be moving offices across town.

Starting tomorrow at noon, Double Guild XP for a week.

Q: What about scout balance?
Caith: Scouts are getting a major increase on Combat Art damage. They will become more reliant on Combat Art damage rather than Autoattack damage. Some tweaks for Bards. The first initial stage of this is done so you’ll see it on Beta. Some of this will affect Fighters as well. The changes are pretty big.

Q: When do we get the items from the collector’s edition?
A: Some items may be received in-game but most will arrive with the release of the expansion.

Q: Will the 88-slot bag be on the Marketplace?
A: No it will only be part of the Collector’s Edition or TLE Pack.

Q: Can we buy one version and then upgrade it later?
Domino: Upgrades are not available right now, I’ll mention to Windstalker that we should clarify if/when that will be available later. I don’t know the details of the plans. Last year I believe upgrades were available after launch? Will mention anyway.

Other Ruleset Servers Besides TLE?

Holly: We want to have an open conversation about this. We’ve been talking about it.

The livestream has ended and we will now be going back and watching the video again and trying to fill in things we’ve missed. We expect the full video to be posted on Youtube in a few hours.